Filipina Starbucks worker in Dubai Mall honoured for her honesty 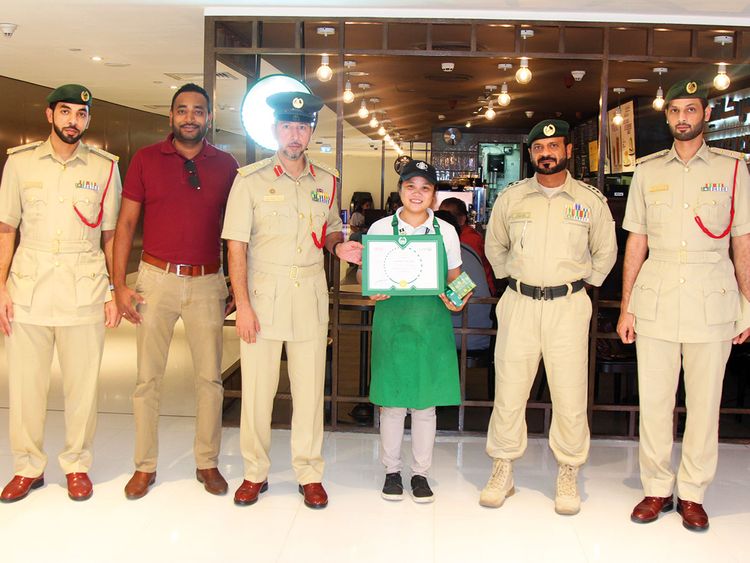 Dubai Police honoured a Filipina worker in Starbucks cafe for her honesty as she returned Dh195,000 in cash, two cheques for Dh500,000 and Dh6,250, a cheque book and some documents forgotten by a man inside the cafe.

The worker, Mae Anne Olmidillo, 27, branch manager at the Starbucks outlet in Dubai Mall, helped return the bag to the owner before she was surprised by police officers who called on her to honour her in the presence of her workmates.

Colonel Rashid Mohammad Al Shehi, deputy director of Bur Dubai police station, said that recognising honest residents and workers encourages positive behaviour in the society and cooperation with the police. He praised the honesty of Mae Anne and said that they found the owner of the bag and returned it to him.

“I call on residents and citizens to follow Mae Anne’s example if they ever find themselves in a similar situation. She is a true example of honesty,” Col Al Shehi said.

Speaking to Gulf News, Olmidillo said that the incident happened on April 18 around 6pm when one of their customers forgot his bag.

“There were two of us who saw the bag, Rosslyn Nini, our Kenyan barista, and me,” Olmidillo, who has been in Dubai for six years, told Gulf News. “

"It is our protocol to check what’s inside the bag first in order to know whom to return it to, but we can only do it with a witness and on camera. I immediately alerted my district manager and our loss-prevention officer on what to do next.”

“When we opened the bag, we were shocked to see Dh195,000 in cash, dated cheques and documents. We waited for the customer to come back to the cafe to collect it, but no one came. So I immediately called the police to report the matter and we turned it over to police officials at the Bur Dubai Police station so they could locate the owner,” she added.

Olmidillo said the owner was not aware that his bag was missing when Dubai Police called him.

Dubai Police asked him to check again and when he did, that was when he realised that he had indeed lost it. He came to the police station to collect the bag around 10pm, she recalled.

“Dubai Police officials told me that the value of contents of the bag was more than Dh200,000 because there were title deeds and other important documents. The bag, they said, belongs to a Russian broker,” she said.

“I stayed at the police station until the owner arrived. He thanked me for returning the bag to him. He said he was very tired and sleepy that day and was unaware of what had happened.”

On August 29, Dubai Police visited Olmidillo’s branch to honour her for her good deed. It all came as a pleasant surprise, she said.

“This recognition is a great honour for my colleague and for me as a Filipino. It is my personal conviction to return any lost item regardless of its monetary value. I believe in the Golden Rule ‘Do unto others what you want others to do unto you’. So when I saw the contents of the bag, I did not think twice of returning the bag to the owner.”