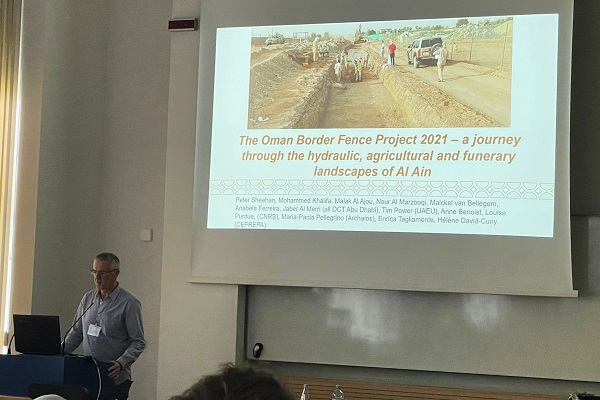 The Department of Culture and Tourism - Abu Dhabi (DCT Abu Dhabi) recently participated in the 55th Seminar for Arabian Studies, where it presented four new research papers detailing archaeological activities and discoveries made by the department’s experts and partners, revealing fresh insights into ancient life in Abu Dhabi and the wider region.

Organised by the International Association for the Study of Arabia, the seminar, which was held from 5 – 7 August 2022 at the Humboldt University of Berlin, is the only annual international forum for the presentation of the latest academic research on the cultural and natural heritage of the Arabian Peninsula.

The paper entitled New light on the Neolithic Fertile Coast: Recent excavations on Ghagha Island and the emergence of domestic architecture in ancient Arabia detailed the results of surveys and excavations undertaken by DCT Abu Dhabi on Ghagha Island, located at the westernmost extent of Abu Dhabi emirate. Two previously unknown Neolithic sites have been identified on the island, one comprising a cluster of stone-built rooms and the other ash lenses and stone features. Finds from both sites include arrowheads, plaster vessel fragments and other stone implements. Radiocarbon dating of the sites indicate that the island was occupied by 6500 BCE, considerably earlier than any other known domestic architecture in the region.

Fieldwork conducted in recent years around the city of Al Ain, by Jebel Hafit and on the edge of the al-Jaww plain has resulted in the discovery of several Palaeolithic surface sites and findspots, dating to over 300,000 years ago. The new sites have enhanced our knowledge of Palaeolithic time period in Abu Dhabi and contribute to understanding human dispersal in southeastern Arabia and beyond. The paper entitled The Palaeolithic record of Abu Dhabi Emirate detailed the work and findings, from the range of artefacts collected from these sites to the geo-archaeological approaches used to identify the raw material sources and illuminate site formation processes.

Finally, the paper entitled The Oman Border Fence Project 2021 – a journey through the hydraulic, agricultural and funerary landscapes of Al Ayn covered the archaeological monitoring and excavation carried out by DCT Abu Dhabi’s Historic Environment Department along an 11.5 km stretch of the border between the UAE and Oman.

The project produced a wealth of new data on the development of the historic oasis landscape of Al Ain, with some of the most significant finds including a large stone-built collective  tomb within an extensive Iron Age cemetery, high-status tombs of the Pre-Islamic Recent (PIR) period, and more than 50 ancient aflaj (underground water channels) of various dates and techniques of construction.

DCT Abu Dhabi operates an emirate-wide archaeological programme, in line with the organisation’s mandate to preserve, protect and promote the ancient history and cultural heritage of Abu Dhabi. The emirate contains some of the most prized and unique cultural and historical attractions and finds in the region and internationally.