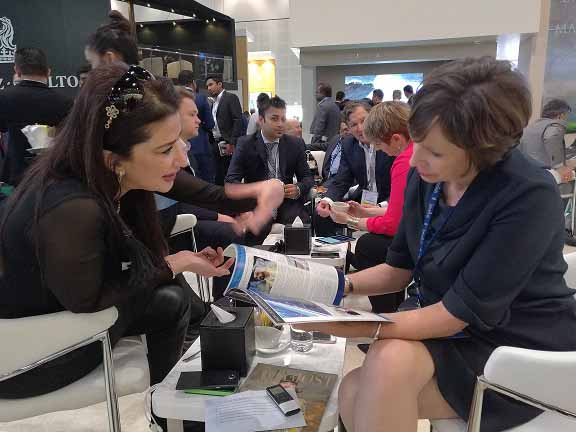 Madinat Jumeirah’s newest hotel Jumeirah Al Naseem, Arabic for ‘sea breeze’ is one of Dubai’s most anticipated launches in 2016. Marking the completion of one of the world’s leading luxury resorts, the construction of the 430-room ‘resort within a resort’ is well underway, with reservations opened from 29 March 2016 for stays after 1 October 2016. The Aviamost team headed by Editor in Chief Rita Boustany met and spoke to the General Manager of Madinat Jumeirah Margaret Paul during ATM 2016 to know more about this new hospitality pearl on Dubai’s horizon…

This year’s theme of ATM 2016 is mid-market travel. How does this tie-up up with Madinat Jumeirah’s plans?

Tell us about your new project, Jumeirah Al Naseem.

It will have 430 rooms with a good mix of different room types and very nice room sizes entry level is 57 sq m which is a good size. The style is more contemporary and the colour palette inspirations which says sand and pearl which are more relaxing colours so you get a feeling of relaxing, comfort, rsort somewhere where you can unwind. So we will be keeping a cultural connection of the Middle East and the same in the public areas. We have commissioned a local artist to put some very nice pieces such as sculptures and pieces that tie in with the heritage.

Even the exterior is going to be very interesting with a semi-modern Arabic style. That was part of the master plan and it all blends nicely.

What will be the feel of Madinat’s newest hotel?

Bringing a fresh new feel of energy, exuberance and excitement to Madinat Jumeirah, Jumeirah Al Naseem aims to show a different side of Dubai, appealing to those discerning travellers who like to explore and may not have considered Dubai before. It joins the grand Jumeirah Al Qasr, the peaceful and recently renovated Jumeirah Mina A’Salam and the exquisite summerhouses of Jumeirah Dar Al Masyaf, to become the fourth hotel within the Arabian Resort of Dubai.

You spoke about the landscaping which is very important. Please tell us more.

The landscaping has been done by the well known landscape designer Bill Bensley who is based in Asia. So the idea was very much to bring the feeling of landscape into the hotel and into the rooms with an eye for detail. Everything has been chosen very nicely to the plants and tiles to the rest areas so there will be a very nice family leisure pool an adults-only pool, a Wadi pool and we are moving the turtle rehabilitation programme to Al Naseem from Mina Salam so we will have a bespoke sanctuary for turtles and we will have a turtle lagoon. So water will be a very key feature to all of the lagoons.

The Turtle Sanctuary will be something new for Dubai

It’s a continuation of what we are already doing. But the turtle lagoon must be a first in the world attached to a luxury hotel and it is also a seawater lagoon with a viewing platform where we can interact with the guests and children and educate them about when the turtles, and about when they come and so on and also invite them to join the feeding time. As a company it is something we are very proud of and I think it will be very exciting.

Who will be looking after Jumeirah Al Naseem?

We have a new General Manager Richard Alexander for Jumeirah Al Naseem so I will be assisting him and the opening will be by the end of the year.

Is it only for guests or for people from outside as well?

No, we also encourage school groups and members of the local community and it’s good to drive that awareness. And around the turtle lagoon we will have 3 or 4 different restaurants.

The new project will have its own spa?

No we will be encouraging the guests to use the Talise spa.

How many bars and restaurants will it feature?

In total we will have 14. Five of them will be tenented restaurants which we will be outsourcing while others we will operate in the hotel frame and complement what we have Of course Al Naseem will be closer to Wild Wadi with accessibility to it.

We are introducing a whole new fleet of 100 Club Cars and they will be hopefully in operation end of June.

You have a Jumeirah office in Moscow?

We keep close contact with our contacts there and it’s good that we have relevant information to be agile and react quickly to market changes.

In China you have your representation?

Yes, we see Asia as an area of development for us and it remains a key focus. China is an emerging market and I think it will continue to grow. The Burj Al Arab is probably the most well known hotel in China and we are tuned into their requirements and on what makes their stay special and on having colleagues who speak in their language. I think that’s what delivers an exceptional experience as against an average experience.

Reservations are open from 29 March 2016 via Jumeirah’s website www.jumeirah.com through its reservation centre and partner agents for stays after 1 October 2016.