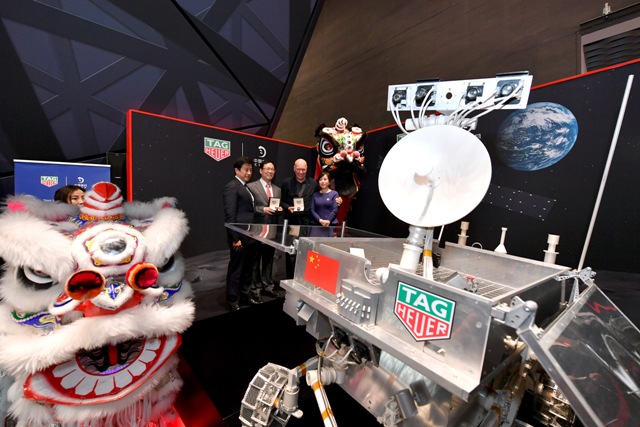 together with China's Lunar Exploration Program (CLEP), TAG Heuer, the avant-garde Swiss watchmaker and Strategic Partner and Official Timekeeper of CLEP, held a science fair focused on aerospace during the Baselworld 2018 Show, presenting the magnificent achievements of the China’s aerospace industry to the whole world.

TAG Heuer's story with space exploration comes back as early as 1962, when American astronaut John Glenn, wearing a Heuer 2915A stopwatch, piloted the Friendship 7 spacecraft to complete a successful three-orbit mission around the Earth. In 2012, a TAG Heuer watch was brought to the International Space Station by SpaceX due to its highly accurate timing. By launching crucial and pioneering partnerships, TAG Heuer has witnessed and propelled the cross-century development of human kind's aerospace industry.

TAG Heuer's partnership with China's aerospace programs began in 2016, when the brand joined hands with China's Mars Exploration Program to launch a global solicitation for program name and logo design, and unveiled the exterior design of the long-awaited, first-ever Mars rover of the country.

In 2017, TAG Heuer became the Strategic Partner and Official Timekeeper of China's Lunar Exploration Program, and vigorously spreading the culture of lunar and space exploration with this own influence. China’s Lunar Exploration Program targets to achieve the lunar surface sampling return with an unmanned lunar orbital rendezvous and docking mode for the first time in the world, while the China’s Mars Exploration Program aims to send an unmanned probe to Mars in 2020 to conduct research on Red Planet for the first time, both are big challenges to the China’s aerospace industry. Chinese scientists and astronauts have been working to overcome the difficulties and achieve the goal, which is in perfect alignment with TAG Heuer’s brand spirit of #DontCrackUnderPressure#. TAG Heuer has constantly spared no effort in supporting China's aerospace industry and contributing to the country's advancement in space technology.

In 2004, the CLEP officially started, deploying with three phases of orbiting, landing and returning. In 2007, China's first lunar probe Chang'e-1 was successfully launched. Chang'e-1 is the first lunar probe to transmit back the most complete 3-D map of the lunar surface, marking the milestone of China becoming one of the countries with outer space exploration capability. Since the second phase of the CLEP being approved and initiated in 2008, Chang’e-2 and Chang’e-3 lunar probes were successfully launched and completed their mission. The strategic goals of the second phase have been fully achieved.

In 2014, the third phase of the CLEP has officially started. The plan is to implement Chang'e-5 mission in 2019, fulfilling the landing of surface and collection of samples. This does not only mean the third phase of “returning” will be accomplished, it will also achieve a milestone in the history of space activities in China -- “Quadruple Success”, including the first automatic collection of samples, the first take-off from lunar surface, the first unmanned space docking from the orbit of moon that is thirty-eight million kilometres away, and the first return of lunar soils in the speed of second cosmic velocity.

Jean-Claude Biver, TAG Heuer CEO and President of the LVMH Watch Division, commented: "TAG Heuer has kept human kind's grand space dream in focus. With this science fair and the two special watches, we are expressing our strong support for China's aerospace program. We feel honored and proud to support China's space exploration efforts, and we sincerely hope that the China’s Lunar Exploration Program will make brilliant achievements."

"The brand spirit of TAG Heuer #DontCrackUnderPressure, reflecting the progressive spirit of Chinese astronauts in making breakthroughs and pursuing excellence. We are delighted to collaborate with such an outstanding brand," said Mr. XuXingli, General Manager at Chang'E Aerospace Technology (Beijing) LLC. "We are also taking this opportunity to demonstrate the achievements of China's Lunar Exploration Program to every person in the world who is fascinated with space exploration. This is of great significance to the development of the China’s aerospace industry."

Ms. Zuo Wei, Researcher at National Astronomical Observatories of China (NAOC) of the Chinese Academy of Sciences (CAS) and Deputy Chief Designer of CLEP Ground Application System, also shared the current situation and development prospects of the China’s Lunar Exploration Program. She said: "China's Lunar Exploration Program represents the painstaking efforts of everyone involved for over a decade. In the next step, China plans to implement the Chang'E-4 Mission this year, and this will be the first-ever soft landing and roving survey on the far side of the moon. Together with TAG Heuer, we will continue to march forward and make history."

Having drawn inspiration from the dark side of the moon, the TAG Heuer Carrera Heuer 01 CLEP Special Edition is limited to 100 pieces. Everything from the strap, to the dial, the chronographs and the bezel is black, with touches of luminescent points. Its 43mm diameter black PVD steel case features an in-house TAG Heuer movement, the Heuer 01. Setting the dark grey sandblasted dial off are gold plated black indexes, minute and hour hands that are coated with superluminova® luminescent materials to improve visibility. The case-back is engraved with the words "Official CLEP Watch" and a limited serial number. This exquisite timepiece boasts a unique charm that invites its wearers to feel like they are travelling through space exploring the infinite galaxy.

The second watch is a sporty Aquaracer with Calibre 5 Automatic, designed to conquer space. It is a technical watch that features the signature codes of the Aquaracer collection. It has a 43mm diameter case and ceramic black unidirectional turning bezel that is water resistant to a depth of 300 meters. To recall the partnership with the CLEP, the black opalin dial has a beautiful Moon design at 09H and the steel screw-down case back is engraved again with the Moon design and "Official CLEP Watch."