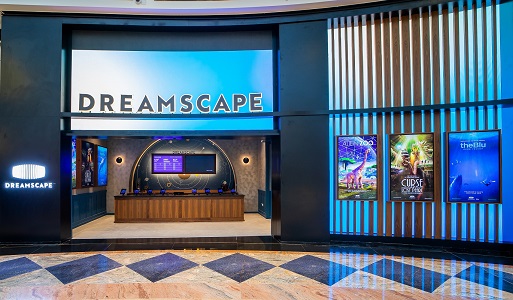 Majid Al Futtaim, the leading shopping mall, communities, retail and leisure pioneer across the Middle East, Africa and Asia, and Dreamscape Immersive, the location-based VR entertainment company, backed by some of Hollywood’s heaviest hitters, today announced the opening of Dreamscape’s first international location at Mall of the Emirates on 19 December, 2019.

Speaking on the announcement, Alain Bejjani, Chief Executive Officer at Majid Al Futtaim - Holding, said: “The future of the entertainment industry lies in the hands of those who can enable human interaction through fulfilling, meaningful and memorable experiences. Dreamscape achieves this by blurring the lines between the physical and the virtual, fully immersing its users with other participants who can all influence the experience together.

We are proud to partner with Dreamscape, as we bring another first for Majid Al Futtaim and the region. The Dreamscape experience will delight customers in a way that has never been seen in this part of the world,” added Bejjani.

Following the publicly lauded opening of Dreamscape’s first two locations in Los Angeles and Dallas, its first location outside of the United States will open at Mall of the Emirates. The Dreamscape experience will feature three original and critically-acclaimed free-roaming and epic immersive adventures, Alien Zoo, Curse of the Lost Pearl: A Magic Projector Adventure, The Blu: Deep Rescue, that will promise adventurers of all ages the experience and magic of immersive and full-sensory storytelling as they are transported to fantastic new worlds.

Walter Parkes, Co-founder and Chairman, Dreamscape Immersive, said: “At its heart, Dreamscape is about wish fulfillment. By merging the scope and emotional power of cinema with the pure adrenaline of a theme-park ride -- all within a totally new VR technology – we have created a way for audiences to enter into and become part of the story for the first time. These are experiences that you cannot replicate anywhere else. We are thrilled to be partnering with Majid Al Futtaim in the MENA region to bring our one-of-a-kind venues to new audiences across the region.”

In Alien Zoo, guests will have the opportunity to travel to a larger than life, intergalactic haven where they come face-to-face with endangered alien creatures from across the galaxy. Upon arrival, travelers will experience the exhilaration of being able to play ball with exotic frogcats, pet majestic creatures, and, by working together, even narrowly escape the galaxy's greatest predator.

In The Curse of the Lost Pearl: A Magic Projector Adventure, audiences will be given a fundamental wish fulfillment: to step through the screen and become part of a movie. Once inside this heart-pumping adventure, participants will be challenged to unlock clues, escape treacherous traps, and work together as they discover the secret of The Lost Pearl.

In The Blu: Deep Rescue, Dreamscape’s breathtaking co-production with WeVR, an epic descent into the ocean to explore dazzling underwater worlds and aquatic life soon becomes an urgent mission to rescue a trapped baby Blue Whale and unite it with its mother.

Majid Al Futtaim continues to focus on a digital and experiential transformation of its business, supported by investments and partnerships that add value to the experiences it offers customers. The launch of Dreamscape Immersive reinforces the company’s ability to merge the physical and digital worlds in order to create enhanced and more valuable experiences for people.