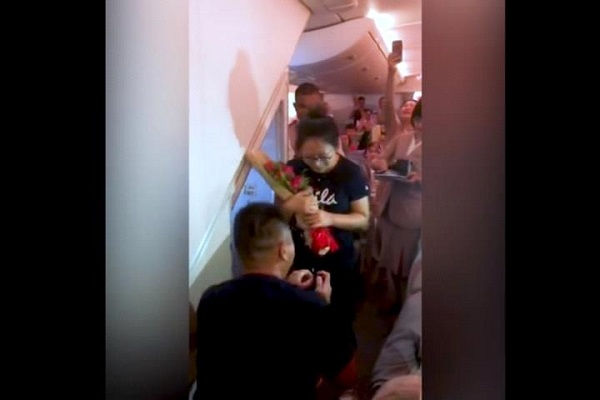 Friday August 17 was Chinese Valentine's Day this year, and one woman got the surprise of her life on a flight from Shanghai to Dubai when her boyfriend made a special announcement.

The groom-to-be said on the plane's loudspeaker, "I am grateful for all your love, support and encouragement in the past year, I would like to make this last forever. I'd like to build a happy family with you for the rest of my life. I hope my life is full of you."

He then got down on one knee in front of the rest of the passengers and offered a bunch of red roses and a ring.

Chinese Valentine's Day is actually the Qixi Festival, and it falls on the seventh day of the seventh lunar month of the Chinese calendar, which was last Friday.

The festival is based on the myth of the 'Weaving Maid and the Cowherd': the story goes that a cowherd fell in love with a Goddess who was taking a bath in a pond near where he lived. They fell in love and lived happily and had twins.

When it was discovered that the Goddess Zhinu had married a mortal she was taken away by the Jade Empress back to the skies. The cowherd Niulang took his children and went after them. When the Jade Empress saw him following, she got very angry and ripped a river across the skies with her hairpin (The Milky Way).

The separated family was so upset they wept continuously. Seeing this, the Jade Empress felt sorry for them and turned them into stars. (Niulang is Altair and Zhinu is Vega).

The myth follows that once a year they are allowed to meet when magpies make a bridge across the Milky Way. Altair and Vega are closest together on the seventh day of the seventh lunar month - hence Chinese Valentine's day.