New road toll charges to be introduced in Abu Dhabi 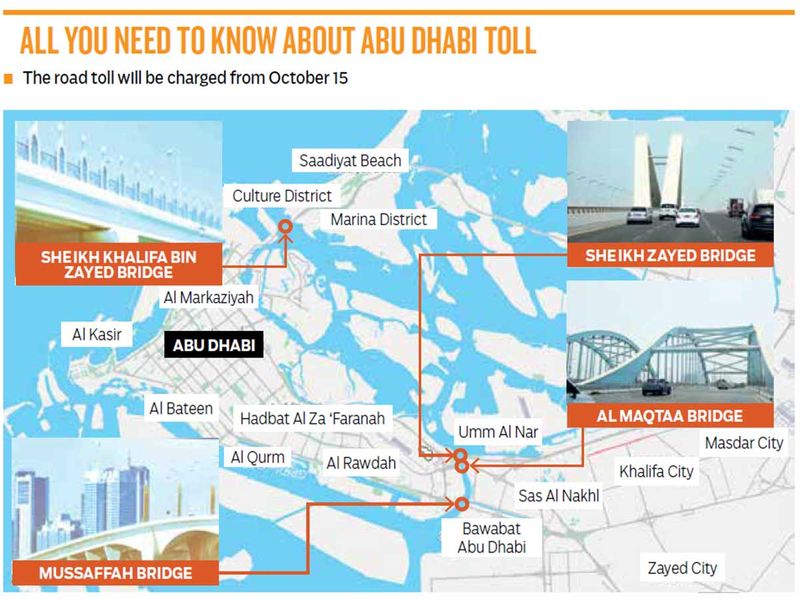 Motorists in Abu Dhabi will have to pay new road toll charges from October 15 this year, transport officials have announced.

The scheme, similar to Dubai’s Salik system which has been in place since 2007, will be rolled out across the UAE capital at four tollgates.

The cashless system will be set up so drivers are automatically charged electronically.

Motorists travelling through Al Maqtaa, Mussafah, Sheikh Zayed and Sheikh Khalifa bridges will be charged Dh4 during morning and afternoon rush hours between Saturday and Thursday. Peak hours are between 7am and 9am and 5pm and 7pm.

Meanwhile, at off-peak times, as well as all day on Fridays and during public holidays, the toll will reduce to Dh2 for every pass of a gate.

Unlike the Dubai Salik system, vehicles will be identified by their number plate, meaning drivers will not need to stick a tag on their windscreen.

For a commuter using one of the four major routes in or out of Abu Dhabi at peak times, the charge will mount up to a Dh160 bill over four weeks for a five-day working week.

Abu Dhabi city residents travelling to Dubai, or, for example, to Yas Island for leisure or shopping, will also be affected. There will be a daily maximum fee per vehicle of Dh16 per day.

Drivers violating rules, for example by passing tollgates in non-registered cars, will receive fines. The most serious offenders will be fined up to Dh10,000.

“The tollgate system encourages the general public to utilise Abu Dhabi’s public transport network, to reduce the use of private vehicles, and to encourage carpooling by individuals working within the same organisation or even the same family,” a statement by the Department of Transport said.

“The tollgate system encourages individuals to plan their time ahead which has a positive impact on sustainability of the transport sector and helps to better maintain infrastructure and the environment.” 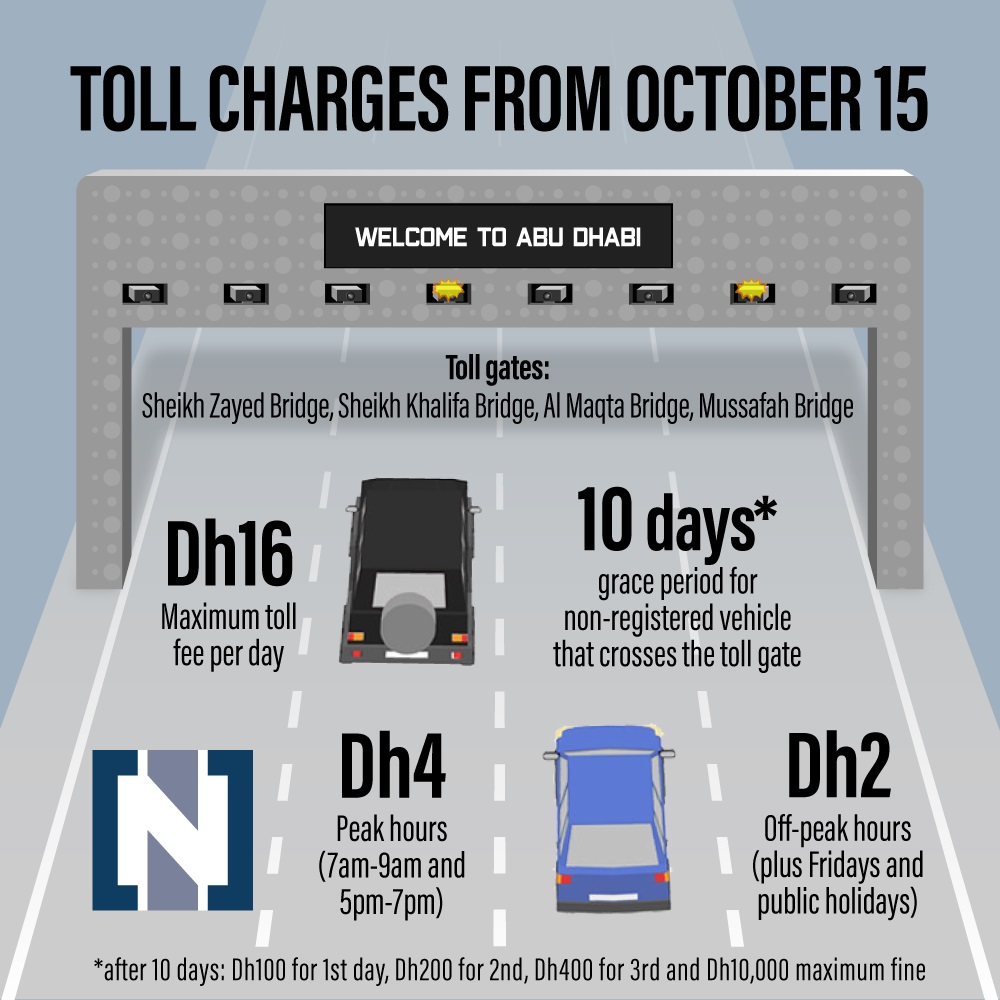 The announcement, made on Thursday at the Department of Transport’s headquarters, confirms speculation that a new road toll regime in Abu Dhabi would be introduced.

Over recent days, residents have shared messages on social media and messaging apps, which included leaked details of the policy.

Last year, it was announced that road tolls were to be introduced in Abu Dhabi. However, further details, such as a timescale for the rollout and levels of charges, have only now been confirmed.

After a 10 working day grace period, fines for unregistered vehicles using the tollgates will be Dh100 for the first day, Dh200 for the second day and Dh400 for a third day, up to a maximum of Dh10,000.

Crossing a tollgate without sufficient balance in a user’s account for vehicles registered outside Abu Dhabi will be Dh50 per day.

If a number plate is tampered with in an effort to avoid fines, the fine will be Dh10,000. Causing damage to e-payment machines or tollgates will also lead to a Dh10,000 fine.

All vehicles currently registered in Abu Dhabi will be automatically registered onto the new system for free on August 30. Drivers will receive a text message with a user name and password allowing them to access an online account.

For owners of vehicles registered outside Abu Dhabi, the owner should register on to the new system before crossing the tollgates. If they do not register, a 10-business day grace period will apply, after which they will be fined.

The road charge in Dubai was introduced more than a decade ago as a means of easing congestion and encouraging travellers to use public transport. There are now seven gates in operation in the city.

When the recent toll was introduced in Jebel Ali, transport officials said it would decrease traffic by about 25 per cent.

The tolls are the latest in a series of charges to affect Abu Dhabi residents. VAT was introduced on January 1, 2018 while residential rental contracts in the emirate are subject to a 5 per cent charge.