Presentation of President Gurbanguly Berdimuhamedov’s new book ‘The Horse: a symbol of loyalty and happiness’ 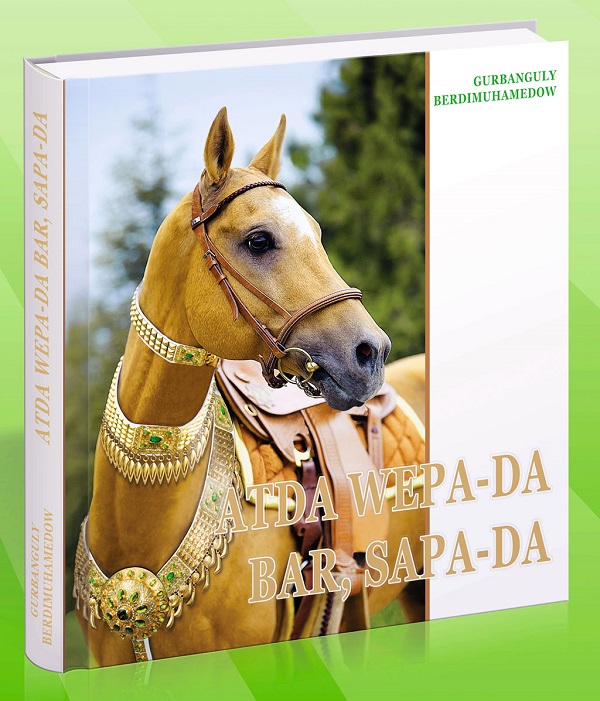 The Mukam Palace of the State Cultural Center of Turkmenistan, the Military Officers’ Palace and the Public Organizations Center have hosted formal presentation events for a new book titled ‘The Horse: A Symbol of Loyalty and Happiness’ by President Gurbanguly Berdimuhamedov.

The book, which came out just ahead of National Turkmen Horse Day, is a wonderful gift of the head of state to his fellow citizens and scores of Akhalteke horse lovers all over the world.

Cabinet members, top officials from national ministries, government agencies and departments, rectors of higher education institutions, representatives of the media and public organizations were among those attending the events.

President Gurbanguly Berdimuhamedov’s new book continues a series of his works about the Akhalteke horses, and is imbued with a sense of unbroken continuity between times and generations, the country’s past and present and its culture where the horses hold a special place and are part of national folklore, literature, arts, music, mentality and life of Turkmens.

‘The Horse: A Symbol of Loyalty and Happiness’ consists of 8 chapters, which one after another present a retrospective panorama of the evolution and trace the role of these horses in world history.

As in all his books, the head of state shares his thoughts with his compatriots. In an introductory chapter entitled ‘Successful Development Leads to a Happy Nation’ the author explains how closely the nation’s history and the equines are bound together. The President of Turkmenistan also describes how he was inspired when he first saw the foal and gave him a lilting and noble name ‘Rovach’. This inspiration developed into a poem opening the new book.

In the second chapter ‘Let Your Horse Be Fast’, President Gurbanguly Berdimuhamedov traces the nation’s spiritual and historical experience. Analyzing the sources, prerequisites, and factors of the Turkmen people’s national mentality, the head of state identifies the distinctive characteristics such as fidelity to their roots, selfless love and dedicated service of their country. While exploring the subject further, the President presents the historical facts and folk stories, recollects the legendary Akhalteke horses, and quotes great Turkmen men of wisdom.

Readers will find a wealth of fascinating information about the glorious past of Akhalteke horses, the deep mark they left on the early civilizations in different parts of the world, and the subtleties of the national art of horse breeding.

A chapter entitled ‘A Swift-Foot Horse is Needed from the Start...’ focuses on spiritual values the horse embodies in the Turkmen literary heritage, including the heroic epic poem “Gerogly”, and represents a strong, independent and prosperous state. In Turkmen folklore, the horse is a symbol of the times, majestic beauty and perfection.

Not only are the stunningly beautiful Akhalteke horses celebrated today in poems and songs, but also in painting, sculpture, and carpet weaving, points out President Gurbanguly Berdimuhamedov. Speaking of the horses in a contemporary context, the head of state mentions contests organized in our country among creative talents for the best depiction and artistic presentation of these beautiful animals.

‘Heaven-Sent Destiny’ is the next chapter that discusses the traditions of Turkmen horse breeding as exemplified by the life of famous horse trainer Aba Annaev. A model village built nearby the International Akhalteke Equestrian Complex is named in his honor. Readers will also learn about the role the ‘heavenly’ horses have played in promoting horse breeding in other countries, and the influence they have made on the development of many breeds. The chapter traces several lines of the Akhalteke horses from which divine horses have descended. 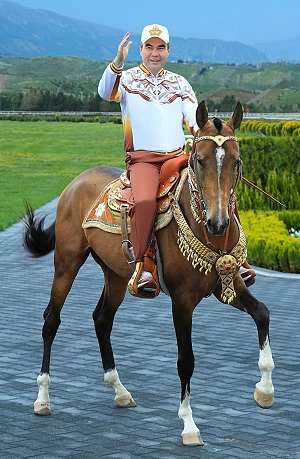 The President of Turkmenistan writes warmly about Galkynysh National Equestrian Group. Established at his initiative, it has become world famous for its extraordinary performances. Touching stories about the Group and its members reflect deep love Turkmens have for their ‘heavenly’ horses.

President Gurbanguly Berdimuhamedov’s new book gives an in-depth cultural and historical overview of the Akhalteke horses’ significance for humanity and our nation. A chapter headed ‘The Horse is All for a Turkmen’ focuses on the horse depicted on the State Emblem of Turkmenistan, on keeping up the traditions of horse raising, upgrading the laws and enhancing international cooperation in breeding and equestrian sports.

This part is logically and perfectly complemented by a chapter titled ‘Yanardag’s Lineage’, which describes the blood line and provides other information on the stallion featured on the State Emblem of Turkmenistan. The book is continued by a chapter ‘Experience and Enhancement’, in which the President looks at the need to foster respect for the nation’s history in children.

The Turkmen nation’s educational traditions, views on life and the environment, which give a base for raising environmental consciousness in our society, are also seen through a prism of horse breeding, interconnecting nature and science, hard work and talent.

The concluding chapter, which is symbolically titled ‘Let horse races take place at festivities’, is devoted to the most exciting moments of Turkmen celebrations – horse races and national games.

At the end of the chapter the head of sums up the discussion, writing: “We are developing the unique philosophy of unity with the horses. It celebrates victory. Victory is strength and stamina, and the path to perfection. Run forward to win, the Akhalteke! Bring your nation glory and fame, the Akhalteke!”

Poets, artists, and university teachers, speaking at the presentation events, highlighted that the new work by the head of state would contribute to maintaining the continuity and promoting the national spiritual values and heritage, including the horse breeding traditions.