A reverence for history 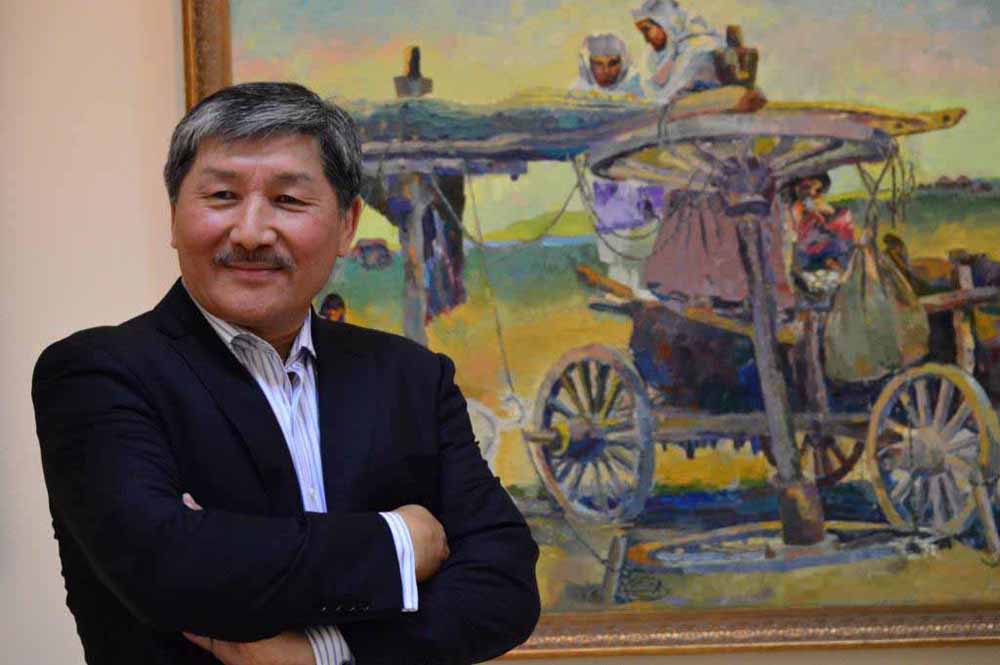 During the period from November 18 to December 15, 2015 an International Cultural Festival of Sheikh Zayed for handicrafts menwill be heldin Abu Dhabi. The cultural festival held since 2009 providing cultural cooperation between the different countries, and also acquainting with cultural heritage of United Arab Emirates people.

This year the Kazakhstan handicraftsmen is participating in the festival for the first time and will compete with the colleagues from the Emirates, Saudi Arabia, Egypt and other countries.

Exhibition visitors will be acquainted with different art schools and try themselves in production of traditional national crafts and enjoy communication and creativity.

One of the famous participants of the festival is Zhanuzak Kerimbekuly Musapir, who is the member of the Union of artists, the Union of journalists, the TV producer and professor of Arts Academy.

Paintings of Zhanuzak Musapir are in private collections, and also in funds of the museums of China, Poland, Germany, Russia and other countries.

Zhanuzak Musapirov inspires from the live nature which never betrays. He doesn't limit himself to a genre framework, wishing to express fully the living position. 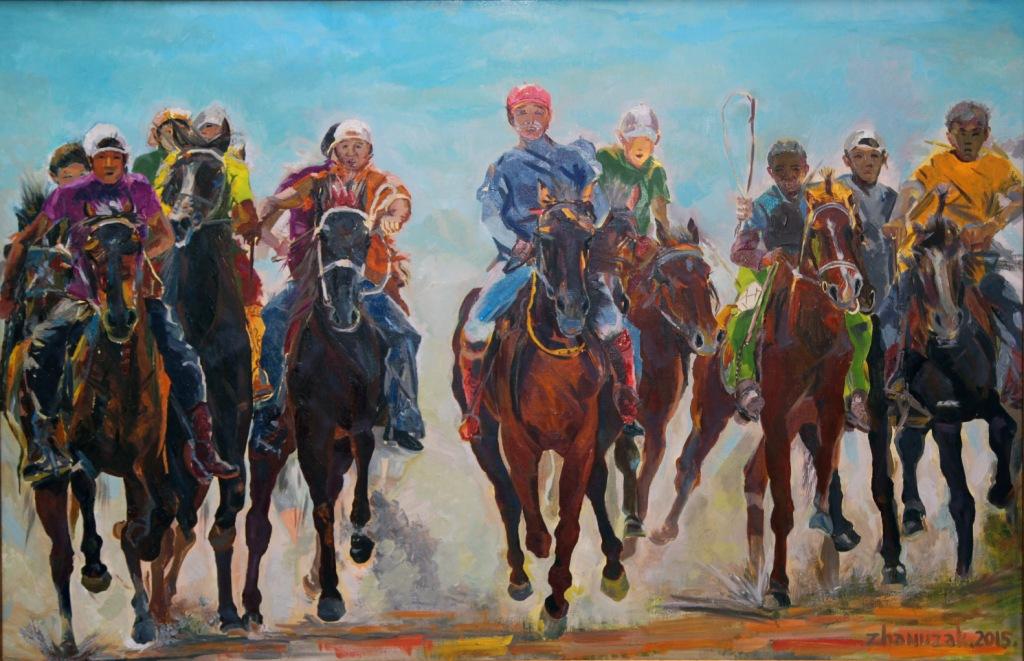 He is always changing and trying to find new ways to express himself. Through his paintings the artist show his feelings and own view of the world. Artist is full of emotions, which take place in his paintings of  bright ancient persons. Charismatic person is constantly in search of new idea.

His versatility allows you to see subtle nuances. It is seen in the lyrical landscapes of Borovoe and industrial Atyrau, urbanized view of Astana, romantic foothills of Almaty and severe Aral. The intensity of colors, the complexity in the development of the texture of the canvas expected by the author experience. He did not stay indifferent to the tragedy of the Aral sea, emaciating not only the earth, but the fate of the Kazakhs found themselves hostages to this site.

Zhanuzak is not original in its enthusiasm for the beauty of the Alatau. Perhaps no artist who is not "sick" like this. But everyone has their mountains. And here the irrepressible artist Zhanuzak  Musapirov manages to see them always different. He admires the proud aloofness of the peaks, covered with eternal glaciers. They delight the viewer and evoke a sense of awe by their grandeur and monumentality of filing. It surprised and discouraged bold bright arrangement of colors which automatically lift the mood.

In the next picture "Peak" he uses a more modern method, bringing the image object to the geometric crystal forms that is also true. The effect of the cold permafrost is such that it is physically penetrates the viewers. The artist also describes the rapidly growing Astana varying transmission landscape from the panoramic vision of the city to the kinds of unusual architecture. 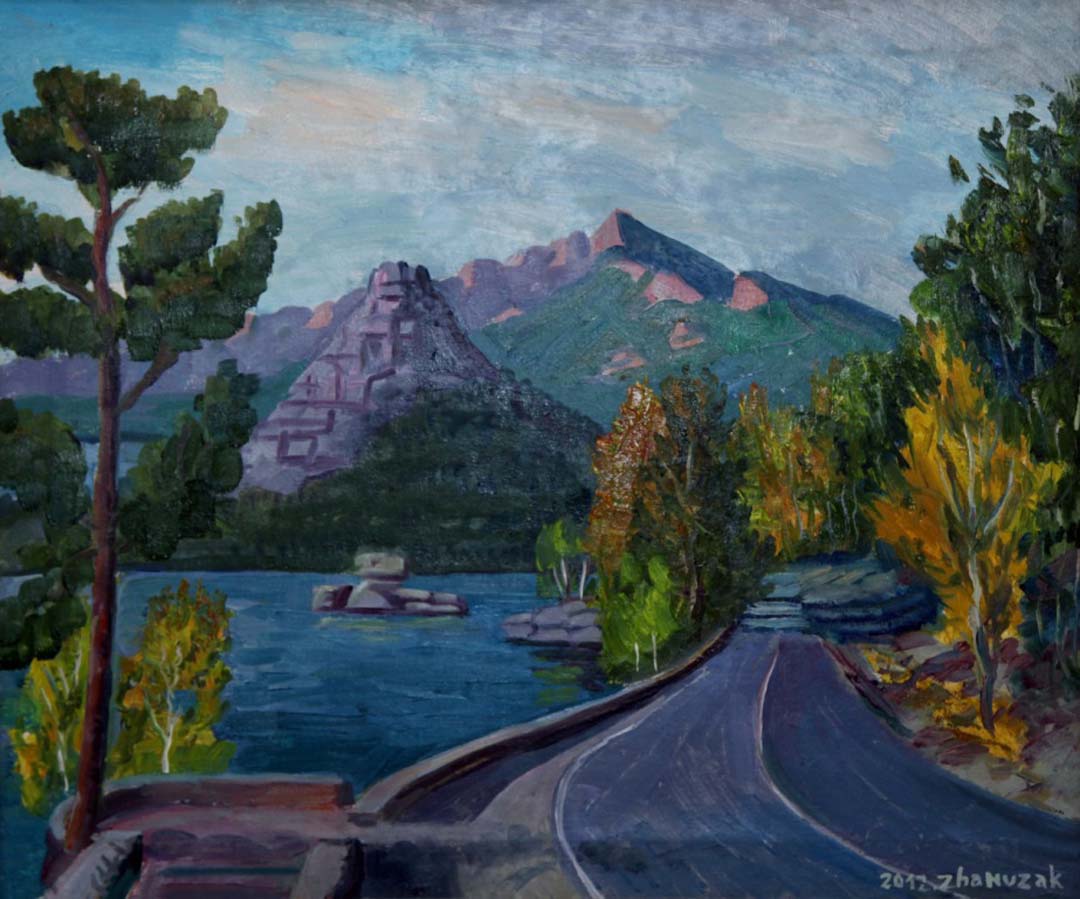 Zhanuzak is quite often visited by nostalgic moods and, then he addresses to the irrevocably left tenor of life of Kazakhs, managing to find "splinters" of the life consigning to the past under a prompt impact of a civilization.

Here the artist shows the whole set of means with imitation of impressionist methods of painting.  The author with special love reports the ethnographic details of life attracting with the healthy ecological beginning.

The artist didn't disregard also the portrait painting. Thus it recreates both an image of the specific person, and a type of a certain historical interval of time. It visually is found in a portrait of the father and his self-portrait. Despite blood related relations - they are representatives of different generations. And this time distance left on them an indelible mark. The image of the father blows a rest and stability, submission, we grow wiser, tolerance to any adversities which it passed together with the people, without having broken, without any compromises. And such condition of  the image is adequately to a way of picturesque transfer. All attentions are focused on a face, in the pacified and at the same time inquisitive and inquiring look of the wise elder. It causes involuntary feeling of respect and respect in the audience the artlessness and openness of nature. In Zhanuzak's self-portrait distinguishes cardinally other approach expressed both in the psychological solution of an image, and in the most complicated structure of composition. Here everything is filled with the movement. Expressly horizontally extended composition contained in itself the restless vain daily occurrence of television studio filled both with own passions of her employees and incessantly arriving information from the outside world. In the picture the place was enough for many details, both in the set interior, and behind its walls. The TV tower proudly soars on the back of the foothills; on the other hand – the car moving along a parapet and, all this fixes the accelerated breath and a rhythm of life of the enormous megalopolis. In the foreground it shows a TV camera, a main tool and speaking tube for Zhanuzak as a journalist.

The author conveys the state of fatigue and some stress from his work, which really exciting and interesting, requires more effort and energy. Given with excited color splashes,  the sky, holding the bulk of the rear space, increases the emotional tone of the picture sounding.

Responding to all actual and topical events of day, Zhanuzak didn't remain indifferent to the celebration of the Kazakh khanate’s 550 anniversary. In one of his works he refers to the image of Baluan Sholak. The comlexity lays in the fact that there was not a reliable source of his vital picture. The artist found a way out of this situation. He managed to find and meet the grandson of Baluan Sholak similarity which was noted by his relatives. Thus, the portrait has documentary value, representing the iconography of the national hero. By the same date the song "Harvesting of kurt" was also dedicated, which represents another authentic episode of national life. Despite the historical concept, the canvas has been solved in the modern expressive style. The work was noted by the evaluation commission and acquired in funds of the National museum of Kazakhstan.

The creative range of Zhanuzak Musapirov is extraordinary wide that meets the expectations of admirers of his talent, stimulating him on new searches.