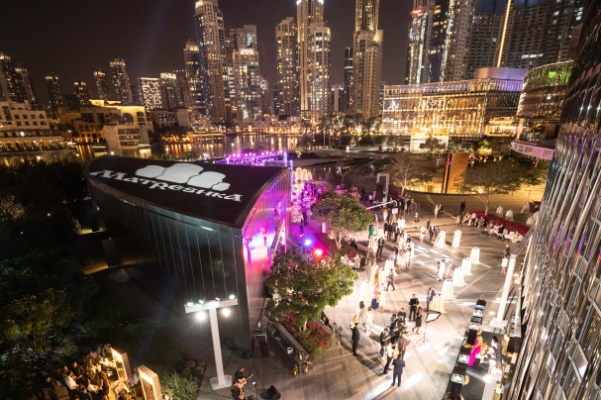 Victoria Lopyreva, the first female ambassador for FIFA World Cup, and Former Miss Russia, hosted “A Russian Fairy Tale”, a gala dinner at the Armani Hotel in Dubai to launch the 2020 Matreshka Festival in a spectacular fashion. The fourth edition of the Matreshka Festival continues to celebrate Russian culture, heritage, arts, fashion, cuisine, and entertainment in an open air atmosphere, creating a cultural bridge between Russia and the UAE.

Set in front of the backdrops of the glorious Dubai fountains and the giant Burj Khalifa, the fairy tale began the moment guests set foot on the white “red” carpet.

Welcomed by Victoria Lopyreva who dazzled with signature diamonds from Damiani, the guests took in the refreshing sites of the venue overflowing with orchids – all in bright fuchsia, just like the dress of Victoria herself. After enjoying front row views of shows where Damiani diamonds and Natalia Gart presented their latest collections, the 300 guests were invited to dinner with a show like no other.

Leading up to the night’s concert, pop-icon Nyusha charmed the crowd with an operettic performance accompanied by digital projection, and was followed by a live performances by classical pianist Yuri Rozum.

The fairy tale evening continued with a live ballet performance courtesy of the Mariinsky Theatre before finally making way for Alexey Chumakov to light up the stage with a multilingual concert, a concert that had guests of all nationalities dancing along.