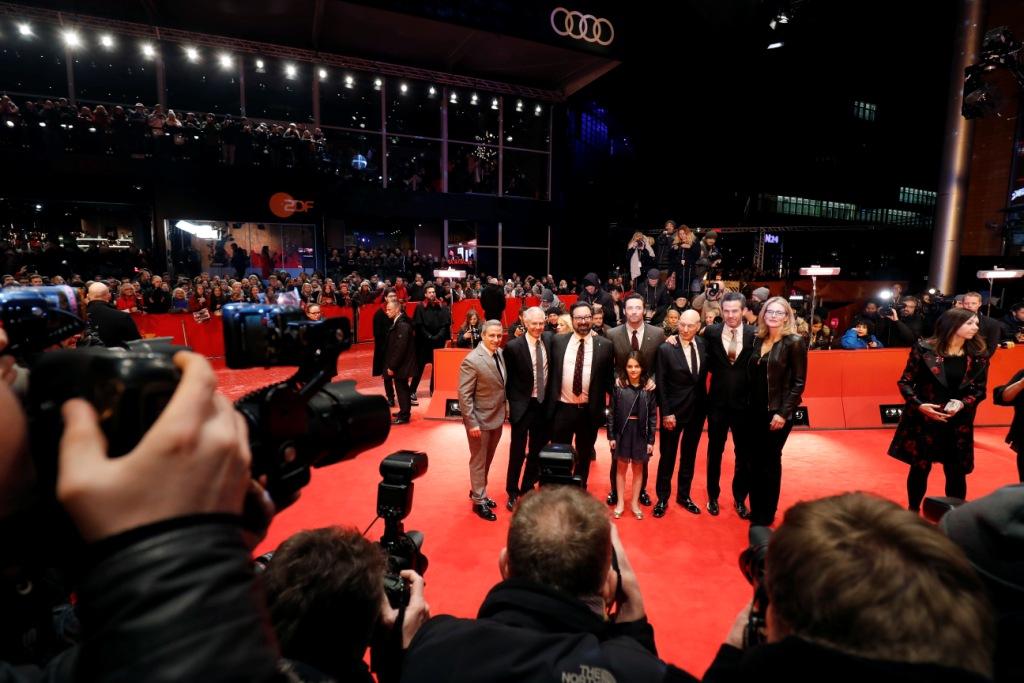 Resilience and perseverance mark the history of Saxony luxury watch brand Glashutte Original. Founded in 1845, its growth was impacted, enriched and sculpted by key world events, such as the two World Wars and their subsequent effects. It’s an inspiring tale not just of survival but also of far reaching, insightful vision benefitting the populace of an entire region in Germany and its succeeding generations. Recently, Marketing Director of Aviamost Fady Boustany was invited to visit the Glashutte Original Manufacture as well as to attend the 67th Berlin Film Festival where the watchmaker is a principal partner and he brings an exclusive firsthand account of the leading watch brand.

Glashutte Original takes its name after the town where it is based near Dresden, Germany. A thriving mining centre featuring silver and iron ore mines, its finances saw a dramatic decline when the mines ran out around 1845, and in the process thousands of people’s livelihoods was severely affected.

It’s isolated and picturesque location amidst steep wooded hillsides and gurgling streams could make one compare it to the Swiss Jura but the pretty village of Glashutte in East Germany is the very heart of German precision watchmaking for nearly 170 years. And there is an all important Swiss link too. The two most well known and world famous German watchmakers, Glashutte Original and Lange are both Swiss-owned. Glashutte is owned by Swatch and is part of its premium sector alongside Breguet and Blancpain while Lange belongs to the Richemont group.

But the Swiss link goes deeper. Ferdinand Adolf Lange had not only visited Switzerland’s watchmakers he had also run a workshop in Paris and it was the thriving Swiss watch industry which convinced him that watchmaking was the answer to the soaring unemployment problem in his home town. So the watchmaker and visionary entrepreneur persuaded the authorities of the Kingdom of Saxony to invest in mechanical timepieces and also extend government investment subsidies to finance the transformation of the town of Glashutte firmly and steadily. And it all was to pay off. He was to also create the town’s very first watch brand and was soon joined by three others.

It soon became a thriving watch industry that by the 1900’s was so famous that its timepieces were copied by other countries who put the Glashutte name on their dials. This was soon remedied by the genuine watchmakers who registered the term Original.

The town was to even survive World War II until the last day when it was bombed by Russian aircraft. The Russian army even carted away the equipment to begin a new industry in Russia and the town became part of East Germany. However, the skilled watchmakers remained.

This industrious group decided to start the industry from its very scratch and through sheer will power it rebounded with force to admirably match the Swiss watch industry and its products in every way.

Isolation also meant the watchmakers became highly integrated vertically and the watchmaking industry ticked on. In 2000 after the Swatch group took over Glashutte Original further investment saw the restructuring of the headquarters.

A watch museum recounts in detail its growth and stormy fate and superb rebound as well as its many collections over the years. It was opened in 2008 in Glashutte’s watch school and is financed jointly by Nicolas Hayek and the local authorities.

The term Glashutte Original Manufactory refers to watchmaking firms that design and manufacture their own movements and Glashutte Original’s ability to do so places it among the world’s leading mechanical watchmakers. The unique dials used in the manufactory are made in Pforzheim, located some 600kms from Glashutte, in its own dial manufactory.

Every timepiece bearing its name is the culmination of the finest watchmaking traditions with the advanced contemporary materials and production technologies. The blend of inhouse design and manufacture of thousands of precision components ensure that each of its exquisite mechanical movements matches the very highest standards of quality making it a work of art.

At Glashutte Original the making of a mechanical watch begins with a brainstorming session and the ideas are worked up in the product planning and design department using computer assisted design software.

Even a seemingly simple movement by this German icon requires several hours to assemble. So for a more elaborate movement with intricate complications such as the Senator Chronometer Regulator it demands the dedicated attention of a master watchmaker for up to twenty working days. This is followed by a thorough examination and testing to ensure the Glashutte Original watches meet the highest rates of precision, water resistance, shock resistance and other parameters

Following assembly, all Glashütte Original watches are thoroughly examined and tested to ensure they meet the most exacting standards for rate precision, water resistance, shock resistance, and numerous other properties. Only at the end of this rigorous process may a watch from Glashütte Original be considered complete.

The 4 Pillars of the collection

Every Glashutte Original collection is proudly built on 4 pillars:

Art & Technik: This refers to the worldwide reputation for excellence enjoyed by German technology combined with their characteristic design aesthetics giving them the signature German look.

Quintessentials: This pays tribute to its proud heritage in design, construction and mechanics. Its rich history starting from 1845 when the first watches were made until today, its watches represent the quintessence of the craft of watchmaking in Glashutte embodying a deep respect for traditional approaches to design.

20th Century Vintage: as different as the watches of the collection 20th Century Vintage may seem, they all have one common denominator: they express the unique flair of a special era. The 1960’s left their traces as a time of new ideals, personal and political revolutions which turned it into an era of self-confidence and creativity, while the 1970’s have a unique influence of art and design. Their influences are reflected in the 60’s and 70’s models on the highest level of German watchmaking art.

Lady Collection: At Glashutte Original true beauty is timeless. Its Lady Collection applies classical elements in a feminine and innovative way. The Lady Serenade blends highly precise mechanics with a feminine look while the Pavonina fuses seductive colour with a wealth of different facets and its PanoMatic Luna enchants with shimmering mother-of-pearl and asymmetrical elegance.

Visionary status is occupied only by a few as it’s an ability to think far into the future. And the master watchmaker Moritz Grossman occupies such a place in the town’s history. Even as the industry grew and flourished, he was convinced that ensuring a continuing supply of qualified watchmakers was key to the industry’s future. And it was largely due to his efforts that Germany’s first watchmaking school was established in Glashutte on May 1, 1878. It was to remain operational for over 114 years helping the industry survive thorough difficult times.

It was during his tenure as a teacher there that Alfred Helwig developed, together with his apprentices, a new cantilevered version of the tourbillion mechanism which would come to be known as the ‘Flying Tourbillon’ and is one of watchmaking’s most intriguing complications.

The “Alfred Helwig” School of Watchmaking

In tribute to the grand heritage of German watchmaking, the iconic brand established a contemporary school of watchmaking in Glashutte and opened the ‘Alfred Helwig School of Watchmaking in 2002. The institute receives hundreds of applications from across the world each year and of these, 28 are carefully selected and admitted to a three-year program. On completion, 24 of these will have acquired the requisite skills and knowledge to become watchmakers while four will have qualified as toolmakers. In addition, all students who complete the training and meet the highest standards are guaranteed full-time employment.

It is located in the splendidly restored building that once housed the German School of Watchmaking and is today the home of the German Watch Museum Glashutte – Nicolas G. Hayek Foundation. The historic site welcomes visitors from all over the world to engage in the history of watchmaking in Glashutte.

In line with the exhibition’s motto “The Fascination of Time – Bringing Time to Life’ the museum presents more than 400 unique exhibits selected to bring alive the history of watchmaking in Glashutte right from the 1840’s to the present day. They include Glashutte pocket watches, wristwatches and pendulum clocks from different periods, marine chronometers and escapement models, historical certificates and patents, tools and workbenches as well as astronomical models and metronomes.

The exhibition is themed in a series of ‘Historical Rooms’ establishing the chronological context of the town and its famous figures while the ‘Time Rooms’ break up the chronological progression of watchmaking which transports the visitor for instance into the microcosm of a mechanical watch allowing visitors to experience the interplay and precision of hundreds of individual parts. There is another multimedia room too containing a detailed interactive glossary of chronometry and where one can make independent discoveries

Named after the founder and former president of the Swatch Group, Nicolas G. Hayek, this non-profit foundation’s mission is to preserve the cultural heritage of Glashutte, to promote the arts, culture, science, research and education in the field of watchmaking.

It was established on 16 March 2006 by the town of Glashutte and the watch manufactory Glashutte Original. Two years later on May 22 2008, the German Watch Museum Glashutte was opened to the public.

After the visitor tours the modern and interactive exhibition, he comes to the Restoration Workshop of Glashutte Original where one is offered an unobstructed view of the watchmakers workbenches, tools, and watchmakers at work. Their special task is to repair and restore historic timepieces – old clocks and watches manufactured in the town of Glashutte since mid 19th century. Its service is also available to private owners of wrist and pocket watches, precision pendulum clocks or marine chronometers made by Glashutte watch manufactures.

As a cosmopolitan cultural hub attracting artists from across the world, Berlin is a historic city of Germany. It also boasts a diverse cultural audience of film lovers and hosts one of the most highly acclaimed annual film festivals in the world, the Berlinale. Its 67th edition was held from 9 Feb to 18 Feb. 2017 at the Berlinale Palast. Over 11 days, Berlinale drew movie fans and the international film industry to cinemas and a large number of events. Its reputation as the world’s biggest public festivals was reconfirmed: a total of 334,471 tickets were sold.

Glashutte Original’s new Sixties Iconic Square collection celebrates the style and flair of the swinging sixties and is launched with the tagline, ‘It’s hip to be square’. Its five different models produced in just 25 models each are presented in the brand’s distinctive square 41.35 x 41.35mm cushion-shaped stainless steel case powered by the in-house automatic Calibre 39-34 chronograph and boast colourful dials.

The iconic brand for the first time established an exclusive watch loan service in a suite in the Festival hotel to offer interested guests its very latest collection. It resulted in its watches being spotted on celebrities on the red carpet of Berlinale, including one on the wrist of Glashutte Original’s CEO Thomas Meier.

Important innovation drivers like virtual reality have played key roles in the show which is an interface between art and technology. With increasing digitalization, the two worlds are merging together. For this reason, the possibilities and acceptance of new technologies was a key topic of discussion during Berlinale as part of the Berlinale Open House program in the Audi Berlinale Lounge.   As the principal partner of the event, Audi supports dialogue between the arts and industry. In addition, fans of cinema can enjoy discussions about current films, exceptional concerts and the best view of the curb where the stars arrive.