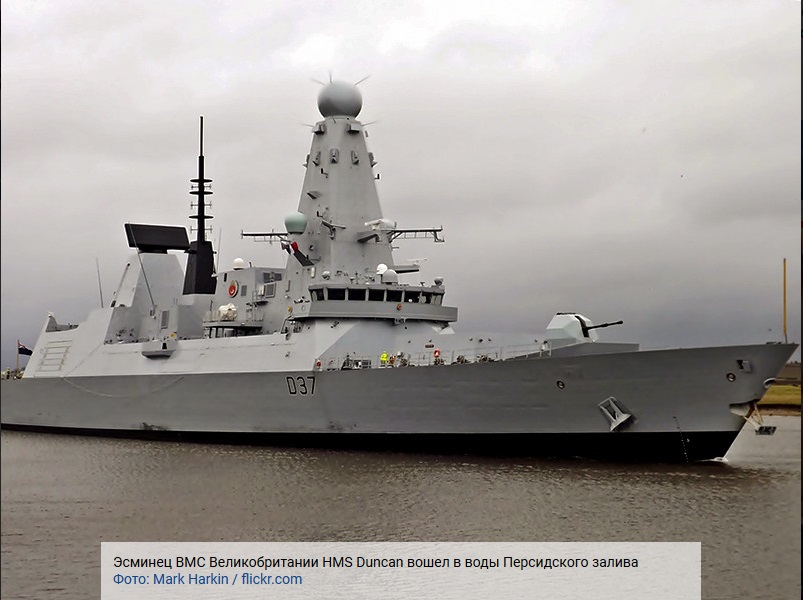 Britain’s most advanced warship arrived in the Gulf on Sunday to increase protection for British-flagged vessels passing through the Strait of Hormuz following the seizure of a tanker by Iran earlier this month.

The HMS Duncan, a Type 45 destroyer, entered the strait on Sunday on a mission that the British government says is crucial to “provide reassurance to the shipping industry” against Iranian aggression. It joins the frigate HMS Montrose, which last week began escorting ships through the narrow waterway crucial to global energy supplies.

According to the UK Foreign Office, HMS Montrose has so far accompanied 35 merchant vessels through the Strait during 20 separate transits, travelling 6,200 nautical miles in the process.

“Freedom of Navigation in the Strait of Hormuz is vital not just to the UK, but also our international partners and allies,” said UK Defence Secretary Ben Wallace.

“Merchant ships must be free to travel lawfully and trade safely, anywhere in the world.”

The arrival of the HMS Duncan coincided with a meeting in Vienna to save the 2015 nuclear deal between Iran and world powers that is at the heart of current tensions in the region. Sanctions imposed by the United States after withdrawing from the deal last year seek to cut off Iran’s oil exports, its main source of foreign earnings. However, there was no substantial progress announced after the meeting between representatives of Iran, Britain, France, Germany, Russia and China.

“The atmosphere was constructive, and the discussions were good,” Iranian Deputy Foreign Minister Abbas Araghchi told reporters. “I cannot say that we resolved everything” but all the parties are still “determined to save this deal,” he added.

Iran wants the remaining parties to the deal to find a way to offset the US sanctions, and has been incrementally breaching limits on its nuclear programme to pressure them.

Iranian President Hassan Rouhani blamed Washington’s withdrawal from the nuclear deal, formally known as the Joint Comprehensive Plan of Action, for the current tensions in the region.

“The unfortunate incidents and tensions in the region today have their roots in the unilateral US withdrawal from the JCPOA agreement and the delusions of the country’s administration," Mr Rouhani said.

The Iranian president also dismissed Britain’s proposal for a European force to protect shipping in the Gulf.

“The presence of foreign forces will not help the region’s security and will be the main source of tensions,” Mr Rouhani said after talks in Tehran with Oman’s minister in charge of foreign affairs, Yusuf bin Alawi.

Mr Alawi said Oman, which maintains cordial ties with both Iran and Britain, was not mediating on the issue but was “concerned" about security in the Strait of Hormuz and was "in contact with all parties".

“Any error or miscalculated move could hamper navigation in international waters and harm everyone,” he told state broadcaster Oman TV.

Britain’s deployment of a second Royal Navy ship in the Gulf marks a U-turn in policy, after the government previously said it lacked the resources to protect every ship against potential Iranian hostility.

Tensions between Tehran and London have worsened since the Islamic Revolutionary Guard Corps seized the Stena Impero, a Swedish-owned tanker sailing under the British flag.

Iran said the move was in response to British forces capturing an Iranian oil tanker near Gibraltar that was said to be carrying crude oil to Syria in breach of EU sanctions.

On Wednesday, Sweden revealed it was talking to Britain and Iran about reducing tensions as Tehran hinted that it may be keen to do a ship swap.

Britain’s Secretary of State for Transport Grant Shapps said he hopes to “de-escalate the situation with Iran”.