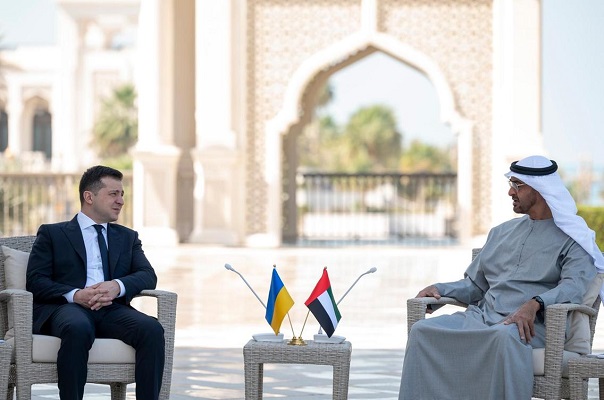 Talking to Twitter, Sheikh Mohammed bin Zayed Al Nahyan said: “It was a pleasure to meet Ukrainian President Volodymyr Zelensky in Abu Dhabi. We examined the special relationship between our nations and how it can be further developed. We also discussed regional and international issues of common interest.”

Zelenskyy arrived in the UAE on Saturday afternoon and said that Ukraine can and will be the guarantor of the food security of the UAE.

"We welcome your country's achievements in space, including the successful mission of the Hope Probe," said Zelenskyy, 43, the youngest president in Ukraine’s history.

Talking about the food security cooperation, Zelenskyy explained that traditional areas of cooperation have already been developed with agro-industrial products being the main exports from Ukraine to the UAE.

"Indeed, Ukraine can and will be the guarantor of the food security of the Emirates. Ukrainian black soils are well known all over the world, we are among the world leaders in the export of wheat, corn and barley," stressed the president.

The Ukrainian food exports to the UAE were valued at $252.2 million in 2019, majorly constituting sunflower oil, rapeseed, eggs, poultry and wheat flour, according to the Ukrainian Embassy in Abu Dhabi.

Even the Ukraine pavilion at Expo 2020 Dubai will symbolise the idea of food security, the president revealed.