Sheikh Mohammed at finishing of Dubai's Museum of the Future 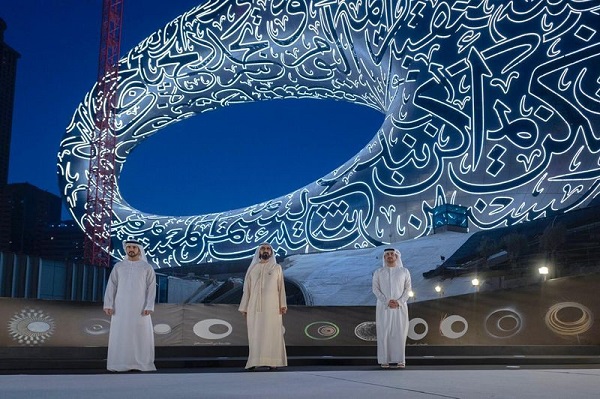 Dubai: His Highness Sheikh Mohammed Bin Rashid Al Maktoum, Vice-President and Prime Minister of the UAE and Ruler of Dubai said in a video shared to his Twitter page, that  he witnessed the final piece being attached to the Museum of the Future.

The 78-metre-high museum sits on 30,000 square meters of land which features reflecting pools, greenspace, a bike path and a recreational use area. It consists of 10 main levels and a museum which will be connected by an elevated walkway to the Metro station, as well as a bridge linking to the Emirates Towers. There are 3 Podium levels, which will include 202 car parking bays and 19,200 square meters of built-up area above ground level. It is surrounded by a sloping landscape, with 7 building levels (11300 square meters built-up area) for a total of 61 meters height above the podium. Two bridges of 212 meters and 69 meters connect the development with the iconic Emirates Towers and the Jet Metro Station.

Sheikh Mohammed bin Rashid attended a ceremony on Saturday held to install the last component of the Museum of the Future, a new iconic landmark and unique incubator for futuristic innovation and design in Dubai.

Speaking on the occasion, Sheikh Mohammed affirmed that the museum represents a global architectural and engineering icon that will be harnessed to build human miracles capable of using the museum to shape a better future, adding that the museum, which stands encased in stainless steel adorned with Arabic calligraphy, combines our Arab originality with our global ambitions. It is a global engineering icon, but speaks the Arabic language.

“Our end goal is not to build engineering miracles, but to develop human miracles that can use the museum to build a better future and Dubai will continues to do so,” Sheikh Mohammed further said. "The ceremony held today marked the final stage of building the future edifice that embodies the UAE’s leadership and creativity in designing and manufacturing unique engineering and architectural landmarks."

"The Museum of the Future along with the Emirates Towers, and Dubai World Trade Center will be the most innovative, creative and influential area in making the future and advancing the process of sustainability and development," Sheikh Mohammed emphasised, adding that the museum has already gained an international fame even before its opening thanks to its unique design. Once open, the museum will be the monument of urban excellence, he said.yhuy

The museum will be provided with 4,000 megawatt-hours of renewable energy by a solar photovoltaic (PV) plant that was designed and constructed by Dubai Electricity and Water Authority (Dewa), something which will make the museum once completed the first in the Middle East to receive a Platinum certification for Leadership in Energy and Environmental Design "LEED", the highest rating for green buildings in the world.