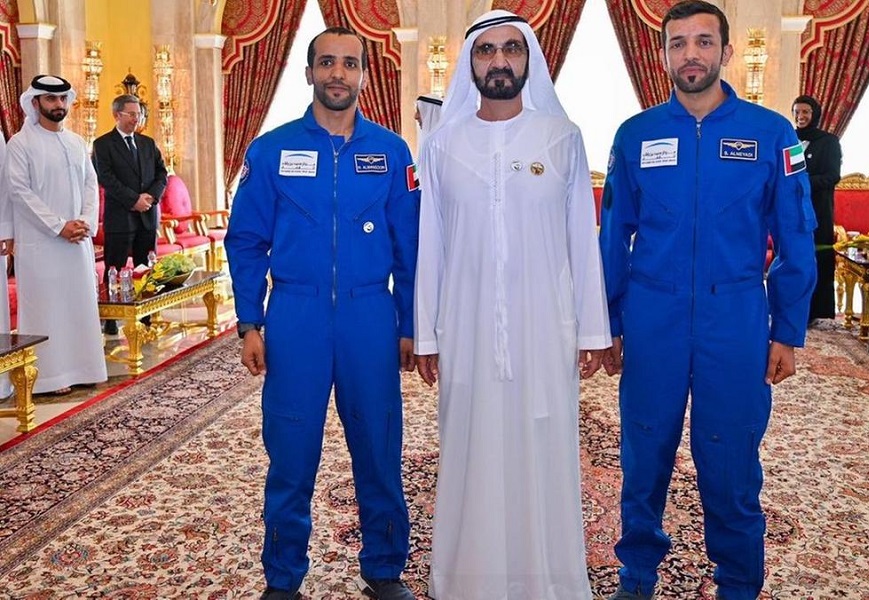 Sheikh Mohammed bin Rashid has met with two Emiratis who are training to carry the UAE flag into space for the first time.

The Vice President and Ruler of Dubai welcomed Hazza Al Mansouri and Sultan Saif Al Neyadi to his palace in Zabeel during his weekly majlis.

The pair were picked from among 4,022 applicants for the chance to become the UAE’s first astronaut later this year. Both men have undergone a rigorous training programme in Russia to prepare for the mission on September 25. But only one will be ultimately selected for the mission, with the announcement expected in May.

Whoever is chosen, to take the historic first step into space, will spend a week on the International Space Station to conduct scientific experiments related to space, planets and gravity.

And he will be no means the last Emirati to travel into space, with plans to launch an exploration probe to Mars to mark the nation’s 50th anniversary in 2021. The UAE Space Agency also intends to establish the first human colony on Mars by 2117.

Sheikh Mohammed wished the astronauts success in their journey.

"Our country has invested in science, education and training the youth. We rely on them to establish a solid and sustainable foundation for all forms of scientific, knowledge and social advancement," he said.

"The nation’s youth, who are armed with science, knowledge and resolve, are the cornerstones of construction, the knights of the horses, and the models of excellence, who are walking with Allah’s blessing. May Allah Almighty bless your journey."

A number of others attended the majlis, including Sheikh Hamdan bin Mohammed, Crown Prince of Dubai, and Sheikh Maktoum bin Mohammed, Deputy Ruler of Dubai.