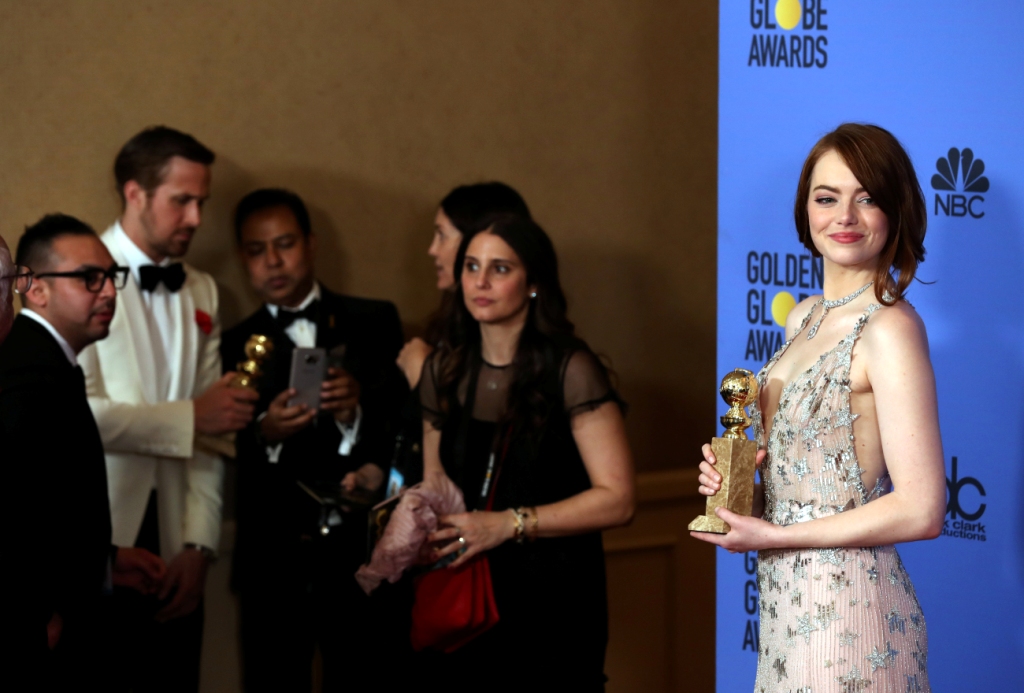 The much-awaited 74th Golden Globe ceremony awards kicked off the awards season early January 2017 at The Beverly Hills Hotel in Beverly Hills Los Angeles. It was one beautiful evening when the stars descended and also an edition which will be remembered as a more inclusive one honoring actors of all colours and race and for the subtle and not-so-subtle political jibes that will stay in memory…

First–time host Jimmy Fallon took off but only after a minor stumble due to a malfunctioned teleprompter. Thankfully he kept things light and not painful, and why not? He had Sylvester Stallone’s three lovely daughters, Sistine, Scarlet and Sophia to back him up. They made up Miss Golden Globes 2017 (their protective dad by the way kept them close at hand and wouldn’t allow them to even whisper to the press).

It is an edition that would be remembered for a long time as it distinguished itself with many firsts. It was the first time that a movie swept up awards for all seven categories it had been nominated for, thereby setting a record. It saw the La La Land team laugh its way onstage to collect its award for Best Picture Comedy or Musical and wins by the handsome Ryan Gosling and lovely Emma Stone in a pale pink Valentino Haute Couture dress ‘lit-up’ by silvery stars and matched by Tiffany & Co jewels

A movie about hope and creativity, it was directed by the 31-year old American Director and Screenwriter of Whiplash fame, Damien Chazelle (sporting a pink gold Jaeger-LeCoultre Master Grande Ultra Thin watch) and set the perfect tone for the event. In his acceptance speech, Chazelle recalled himself at the age of three telling his elder sister that he wanted to make films.

So dream young but never give up we say!

Political jibes ruled the evening in subtle and not so subtle ways with Fallon mumbling the awards were ‘one of the few places left where America honors the popular vote.’

One other aspect the 74th Golden Globes will be recalled for is that it was the most inclusive edition to date. Meaning, there was a healthy mix of winners from artists of all races and culture. It came after all the hue and cry of last year’s edition (labelled as a ‘white-wash out’) speaking volumes about racial discrimination.

And it was the acceptance speech by Tracee Ellis Ross, (looking stunning in a sparkly, strapless Zuhair Murad Couture cage dress) winner of Best Television Actress Globe for her role in the ABC series ‘Black-ish’ which captured the sentiment.

“This is for all of the women of colour and colourful people whose stories, ideas, thoughts are not always considered worthy. I want you to know that I see you. We see you.”

She is the first black actress to win in the category since 1983 when Debbie Allen won for Fame.

At this edition, young actors were highly appreciative of their wives and families. Ryan Gosling (looking dapper in a white Gucci tuxedo) praised wife Eva Mendez for managing their home, two little daughters as well caring for her late, cancer-stricken brother while he was busy shooting for La La Land.

Nominated for Deadpool, brand ambassador Ryan Reynolds flaunted a Piaget Altiplano watch and was effusive about wife Blake Lively who showed off her post-pregnancy figure in a striking Atelier Versace gown with Swarovski’s crystal chainmail embellishment. So there’s hope for the future after all.

Meanwhile, the critically acclaimed Moonlight produced by Brad Pitt (smart in Tom Ford) and written and directed by Barry Jenkins, (nominated in five categories), picked up the Globe for Best Picture Drama. Nominee Naomie Harris, who plays the lead character’s mom in the film, shimmered in an Armani Prive gown with a plunging necklace.

But the most rivetting look of the evening was sported by the black and beautiful screen, stage and TV producer and actress, Viola Davis who wore a bright and canary-yellow one-shoulder Prada dress and Harry Winston jewels. She later walked away with the Golden Globe for Best Supporting Actress for her moving performance in Fences and also gave one of the best introduction speeches for her idol Meryl Streep’s acceptance of the Cecil B. DeVille award relating her astute power to observe, assimilate and to give back onscreen with a lasting impact. Her words on Streep speak for each of us. ‘You make me proud to be an artist!!! You make me feel that what I have in me – my body, my face, my age is enough…’

The powerhouse talent 67-year old Meryl Streep (dressed in an attractive black Givenchy couture by Riccardo Tisci embellished gown), was to give an acceptance speech which would be remembered as an impassioned plea. She spoke of her pained response earlier in 2016, to a real-life performance (by those seeking to hold the highest office) mocking a physically disabled reporter saying, “Disrespect invites disrespect. Violence incites violence.”

The dresses and gowns this year could be easily categorized under pink panache, silver streaked, yellow camp and black and white ensembles. We will pick a few…

One of the prettiest in the line-up was certainly Phil Collins’ daughter and nominee for the Warren Beatty directed film Rules Don’t Apply, Lily Collins dressed in a floral Zuhair Muraad gown matched by Harry Winston Cluster earrings, vintage 1967 and rings.

Another lovely-in-pink lady was Felicity Jones who opted for a Gucci dress with delicate lacework matched to perfection by Chanel jewellery.

OMEGA ambassador Nicole Kidman meanwhile gave the tricky task of her gown selection to daughters Faith and Sunday Rose and they picked a palest-pink and silver Alexander McQueen dress with the most imaginative sleeves saying, “You look like a fairy godmother mommy!”

Yet another actress in the similar brand combo was presenter Reese Witherspoon who looked plum in a sleeveless Prada gown and Tiffany Archival necklace, earrings and ring.

The Danish Girl actor and OMEGA ambassador Eddie Redmayne who looked well turned out as usual in a Prada suit and flaunted a Speedmaster Moonwatch Professional Chronograph.

Post Golden Globes 2017, it was the words of Meryl Streep, the 30 times Globe nominee and 8-time winner of Golden Globe which will resound for a long time, ‘Hollywood is crawling with outsiders and foreigners and if you kick them all out, you’ll have nothing to watch but football and mixed martial arts’ which are not art.’

She finished off with the words of her late friend Carrie Fisher of Star Wars fame,

‘Take your broken heart, make it into art.’

True. Pain just like happiness, can inspire one to greater creative heights and one’s loss turned into triumph…