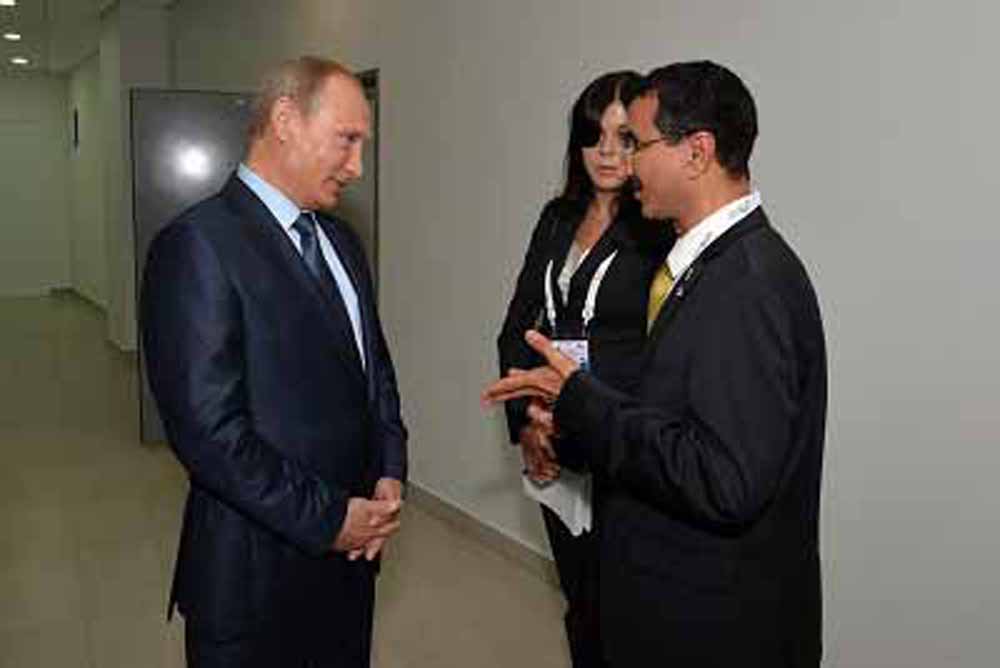 Russian President Vladimir Putin has met Sultan Ahmed bin Sulayem, Chairman of DP World and Chairman of Ports, Customs and Free Zone Corporation, at the opening of the Eastern Economic Forum (EEF) held in the port city of Vladivostok, Far East of Russia.

Speaking at the EEF, which was held to encourage international investments into Russia’s remote but resource-rich eastern region, Mr. Putin said the Russian government would create the “best conditions for domestic and foreign investors to conduct business – so that in performance and return on capital, the Russian Far East can successfully compete with leading business centers."

President Putin underscored his nation’s keenness on maintaining good economic and business relationships with the UAE, acclaiming the country’s incredible across-the-board progress and its leading position in global trade and port industry. He particularly highlighted the prominent UAE investments based in Russia, being one of the major foreign direct investments in the country. He said that Russian port sector offers great opportunities for investment, where DP World can be effectively involved in the development of such a promising industry.

Vladimir Putin welcomed DP World into the Russian market; and he mandated both Yuri Trutnev, Deputy Prime Minister of Russia and Presidential Envoy to the Far Eastern Federal District, and Maxim Sokolov, Minister of Transport of the Russian Federation, to work diligently so as to provide the global port operator with utmost investment facilities and remove any hurdles to its potential business operations in the Far East, as well as to seek to expand collaboration with the company to include other regions of the federation in the future.

Bin Sulayem described the meeting with the Russian President as “a precious opportunity” which enabled exploring the existing and future potential of joint cooperation in the port operation and free zone sectors both within this vital region in the far east of the country and across the Russian federation in general. “DP World has got the expertise and resources which position us to be a key player in the execution of Russia’s development plans, particularly for its eastern region’s port and free zone industry,” he said.

He added : “The Russian Federation is a major economic partner of the United Arab Emirates. Their bilateral trade reached more than AED 10 billion in 2014, while Emirati investments in Russia were valued at USD 18 billion. Over 3000 Russian businesses are currently operating in the UAE in various sectors, including trade, manufacturing, and oil and gas. The growing economic relations between the two nations promise great prospects of business cooperation in many fields; the ports and logistics sector is just one of them.”

Russia’s inaugural Eastern Economic Forum, which was held in Vladivostok from September 3 to 5, was a unique platform aimed at the presentation of new favorable conditions and facilitations for investment and doing business by means of exclusive customs and tax procedures being offered to encourage investors to come and invest in the Far East region of the country – the Territory of Priority Development and the Free Port of Vladivostok are among these growth-driving incentives.

The creation of the Free Port of Vladivostok will be the most ambitious project to stimulate the economic development of the Russian Far East and the successful integration of Russia into the international economic relations system of the Asia-Pacific region. In December 2014, Russian President Vladimir Putin for the first time offered to grant the capital of Primorsky, Vladivostok, the status of a free port with easy customs regime.

The project is aimed at the enhancement of cross-border trade, the development of transport infrastructure and the inclusion of the Primorsky Territory in the global transport routes. It is also intended to attract investment, create a network of logistics centers with special conditions for transporting, storing and partial cargo handling, organize non-resource export-oriented industries and increase high value added productions.