Two oil tankers damaged after 'reported attack' in Gulf of Oman, US says 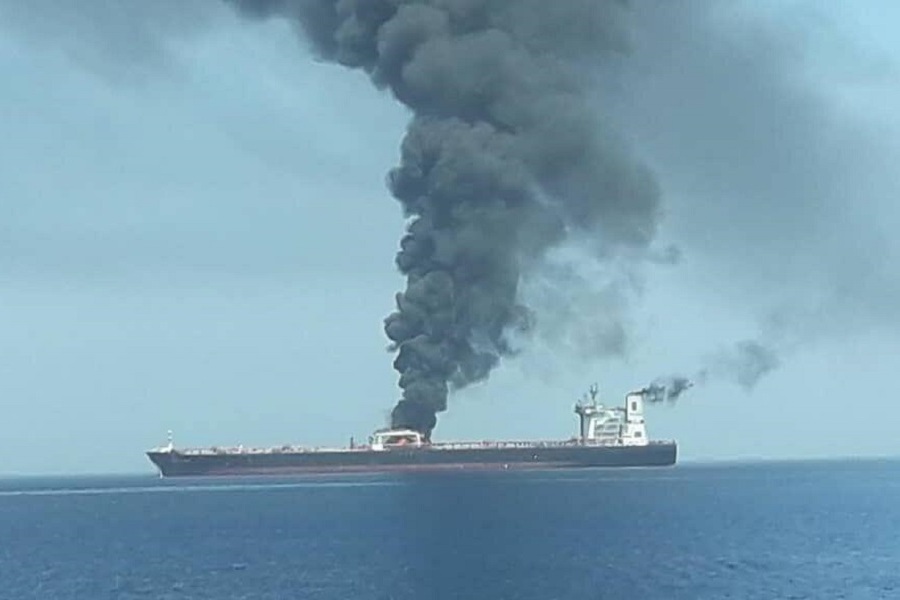 The US Navy is assisting two oil tankers that were targeted in suspected attacks in the Gulf of Oman after it received distress calls from them on Thursday.

"We are aware of the reported attack on tankers in the Gulf of Oman," said a statement from the Fifth Fleet, based in Bahrain.

"US naval forces in the region received two separate distress calls at 6.12am local time and a second one at 7.00am."

"US Navy ships are in the area and are rendering assistance."

Dryad Global, a maritime intelligence company, identified one of the vessels involved as the MT Front Altair, a Marshall Islands-flagged crude oil tanker. The vessel was "on fire and adrift", Dryad said.

International Tanker Management, which operates the MT Front Altair, said an explosion caused a fire on board the ship.

The Iranian news agency IRNA reported on Thursday that the Front Altair, an oil tanker damaged in an attack in the Gulf of Oman, had sunk. The Norwegian owner said it was afloat and its crew were safe. The other tanker was adrift without any crew.

The Norwegian shipping company Frontline confirmed on Thursday that its oil tanker Front Altair was on fire after an incident in the Gulf of Oman, Norwegian newspaper VG reported.

All 23 crew members were brought to safety, a spokesman told the newspaper.

The ship, which was built in 2016, had set sail from the Emirati port of Ruwais late on Tuesday local time and was set to arrive at the Taiwanese port of Kaohsiung on June 30. It is believed that the vessel had been loaded with oil in Abu Dhabi before setting off on its journey.

The second vessel was identified by its manager as the Panama-flagged Kokuka Courageous, Reuters reported. It set off from the Saudi port of Al Jubail on June 10 and was on course to reach Singapore by June 22.

Its Japanese operator Kokuka Sangyo said that the methanol tanker came under fire.

"It appears other ships also came under fire," company president Yutaka Katada told reporters in Tokyo, confirming an earlier report from its Singapore management company about a "security incident" in the busy shipping waterway.

"Our crew members made evasive manoeuvers but three hours later it was hit again. The crew assessed that it was dangerous to stay on this ship, and they used lifeboats to escape," added Katada.

Meanwhile, Japan's Economy, Trade and Industry Minister Hiroshige Seko told reporters: "A tanker carrying Japan-related goods was attacked. There were no injuries among the crew members. They got off the tanker. There were no Japanese members."

There has been no official confirmation of how the vessels were attacked or who was responsible. But Thursday's incidents come after what the US has described as Iranian attacks on four oil tankers off the coast of the UAE in May. Iran denied being involved.

The Iranian foreign minister described the reported attack on oil tankers near the Strait of Hormuz as suspicious, since it occurred during a meeting between Japanese Prime Minister Shinzo Abe and Iran's Supreme Leader Ayatollah Ali Khamenei on Thursday.

Mohammad Javad Zarif made the comment in a tweet: "Suspicious doesn't begin to describe what likely transpired this morning."

Shipping paper Tradewinds reported that an oil tanker owned by Frontline had been struck by a torpedo. 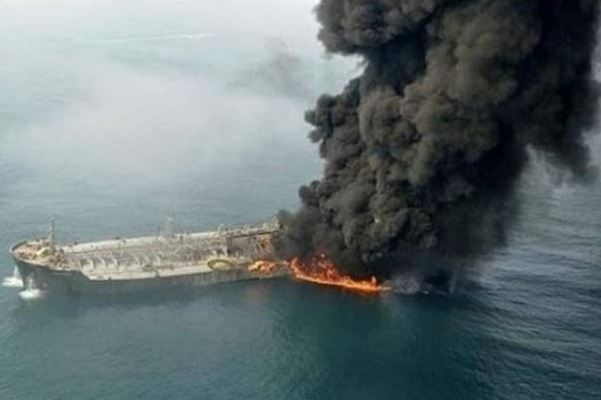 Sources told Reuters the two oil tankers were on fire and that both were evacuated after the incident.

Iran's navy rescued 44 crew members from tankers after an "accident" in the Sea of Oman on Thursday, Tehran's official news agency Irna reported.

The company is ready for any emergency and has taken all necessary precautionary measures to ensure the safe operation of its fleet, KOTC added.

Taiwan’s state-owned petroleum, natural gas and gasoline company, the CPC Corporation, said the Front Altair was carrying 75,000 tonnes of Naphtha for them.

United Kingdom Maritime Trade Operations, which is run by the British navy, put out an alert early on Thursday. It did not elaborate but said Britain and its partners were investigating. The group urged "extreme caution". Britain said on Thursday it was deeply concerned by reports of explosions and fires on vessels in the Gulf of Oman.

A spokesman for Bernhard Schulte Ship Management said 21 crew had abandoned the Kokuka Courageous after the incident, which resulted in damage to the ship's starboard hull.

The master and crew were quickly rescued from a lifeboat by the Coastal Ace, a nearby vessel.

One crewman from the Kokuka Courageous was slightly injured in the incident and received first aid on board the Coastal Ace.

"The Kokuka Courageous remains in the area and is not in any danger of sinking. The cargo of methanol is intact," the spokesman said.

The co-ordinates offered for the incident by the British group put it some 45 kilometres off the Iranian coastline.

Benchmark Brent crude, apparently reacting to the incident, rose in early trading Thursday to over $61, a 2.3 per cent increase.