The UAE continues to amaze and astound: sweeping vistas, the highest skyscrapers, desert resorts, pristine beaches and artificial islands which can be seen from the moon. Indeed it rivals one’s imagination and admirably matches up to the best in the world.  As an unstoppable force it continues to produce yet more wonders and we update you on some of its latest tourist attractions in store…

Recently, the Ruler of Dubai HH Sheikh Mohammed bin Rashid Al Maktoum, launched a mega spectacular tourism project titled the Dubai Frame or Al Berwaz Tower to be built at a total cost of Dh120 million at the lush and sprawling Zabeel Park. Expected to attract a further 2 million visitors and tourists it will be completed by end of 2013.

The conceptual design proposal of the tower by Fernando Donis of the was among 926 entries for the 11th ThyssenKrupp Elevator Award and won $100,000. Established in 1988, the award is an international architecture competition which takes  place every year in a chosen city.

Visitors will be able to watch ’s iconic buildings and skyscrapers from atop its 150 metre-high glass bridge on the window-shaped 150X105 metre structure. It will have facilities to host cultural activities, exhibitions and conferences on the ground floor and each side shaft will have lifts that will take the visitors to the top of the structure where a   cafe will offer breathtaking 360-degree views of the entire city. The cross beam is   designed to have a glass bridge with an observation deck of the distinctive landmark. 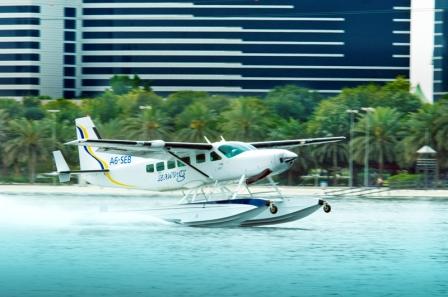 Offering you a scenic tour of and its fantastic icons all in one go is the popular tourist attraction Seawings. Starting from a range of departure points based on your requirements and needs you can get to see amazing Dubai’s old historic areas like the Bastakiya and its new towering attractions such as the Burj Al Arab, the ambitious Burj Khalifa, The Palm islands and more all from high up in the air. A child-like glee grips you as you enjoy a sense of freedom and you want to repeat the experience again for you’ve forgotten to click the camera!

For those who are on a budget, and wish to save just visit the Seawings website and you’ll discover that you can save up to 50% under its promotions the Last Minute option.

All you have to do is enquire online and select a preferred date of flight. If there are seats available, they will call you back to check if you would like to book your seat at last minute rates. It has several other attractive promos as well.

Recreating the lost world of the Atlantis civilization, said to have sunk mysteriously eons ago is ’s highly popular Aquaventure in its prestigious Atlantis, The Palm hotel. From meeting sharks at close quarters to post home some unbelievable shots to watching giant sting rays swim past majestically, a host of novel experiences awaits you at Aquaventure, home to more than 65,000 fish and sea creatures representing over 250 species.

Before you enter the water, you will be given a briefing and taught the sign language and gestures that will be used underwater. During the 20 minute Shark Safari, participants will get up close and personal with the many Black Tip Reef Sharks, rare Marble Rays and exotic fish for an unforgettable experience.

At The Ambassador Lagoon you can view the lost relics and the sunken glory of Atlantis’ streets and boulevards. It focuses on marine life found in the local waters of the , including Golden Trevallys, Cobias, Crescent Angelfish and a variety of sharks and rays. You continue to the Lost Chambers where you can view the advanced inventions of the ancient civilization even as you watch amazing creatures such as star fish and pencil urchins, both found in local Arabian waters.

Several centuries ago the was renowned as a pearl diving centre of the world for its bewitching pearls known as Oriental or Eastern pearls. Bringing back the magic and charm of ancient pearl diving once more is Dubai-based luxury hospitality company, Jumeirah Group offering one a chance to learn and experience first hand the ancient pearling traditions.

Participants meet at Jumeirah beach Hotel and are transported by bus to Palm Jebel Ali where they are briefed and provided with traditional clothing. They then board an authentic dhow, the traditional boat off the shores of Jebel Ali and use original pearl diving methods to collect oysters in the shallow waters of the Gulf, diving to depths of three to five meters. Singing and story-telling capture the beauty of the past and participants also get to relish typical Emirati fish and rice dishes for lunch.

The Pavilion Dive Centre at Jumeirah Beach Hotel is running this exciting cultural activity in partnership with the Emirates Marine Environmental Group (EMEG), Tuesday to Saturday every week. Lucky finders of pearls become the rightful owners! So dive in!