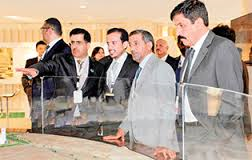 Milan: A host of representatives from participating Expo Milano 2015 pavilions, visiting delegations and companies are reaching out for business opportunities in the UAE at Future Business UAE, a dedicated conclave within the UAE Pavilion, where a contingent of the UAE’s most pioneering and visionary public and private sector organisations are championing the country’s credentials as a global hub for investment, trade and commerce.

A tailored investment platform to maintain and develop the UAE’s increasingly pivotal role in the global economy, the landmark Future Business UAE platform represents the first time the country has mounted a permanent ‘corporate exhibition’ for UAE companies and entities to leverage the Expo’s global visitor reach and foster international co-operation in key national growth areas, as identified in the UAE Vision 2021.

Running from May 1 to October 31 at the Milanese edition of the World’s Fair – the once-every-five-years global showcase that is also the world’s oldest, continuously-running mega event - Future Business UAE is managed by Dubai World Trade Centre (DWTC) on behalf of the National Media Council, which has created the UAE National Pavilion on behalf of the UAE Government.

At Future Business UAE, MOEW and DSCE are discussing sustainable energy initiatives with other international councils and regulators: “The Ministry of Environment & Water’s participation at Expo Milan 2015 is part of its role to develop and promote sustainable development projects, and to ensure further development of the UAE’s environmental sector,” said Engineer Mariam Saeed Hareb, Assistant Undersecretary of Water Resources & Nature Conservation, MOEW, from the opening of Expo Milan 2015.

“We will present the strategies, initiatives and achievements of DEWA, and exchange best practices and experiences with other institutions and organisations from all over the world. As part of our support for the UAE Vision 2021 and Dubai Plan 2021, we are also showcasing the Mohammed Bin Rashid Al Maktoum Solar Park, which DEWA is operating. The Park is one of the world’s largest strategic renewable energy projects based on the Independent Power Producer (IPP) model, with a planned total capacity of 3,000MW by 2030,” added Al Tayer.

With Expo Milano 2015 being held under the theme ‘Feeding the Planet, Energy for Life’, Khalid Sharif Al-Awadhi, Executive Director of Food Control Department, Dubai Municipality, who led a delegation to the opening days of Expo Milan 2015, revealed his team had already conducted numerous productive meetings and dialogues with many different country government and private business groups in the food sector including the Minister of Agriculture for the Lombardia region and other international food regulatory officials.