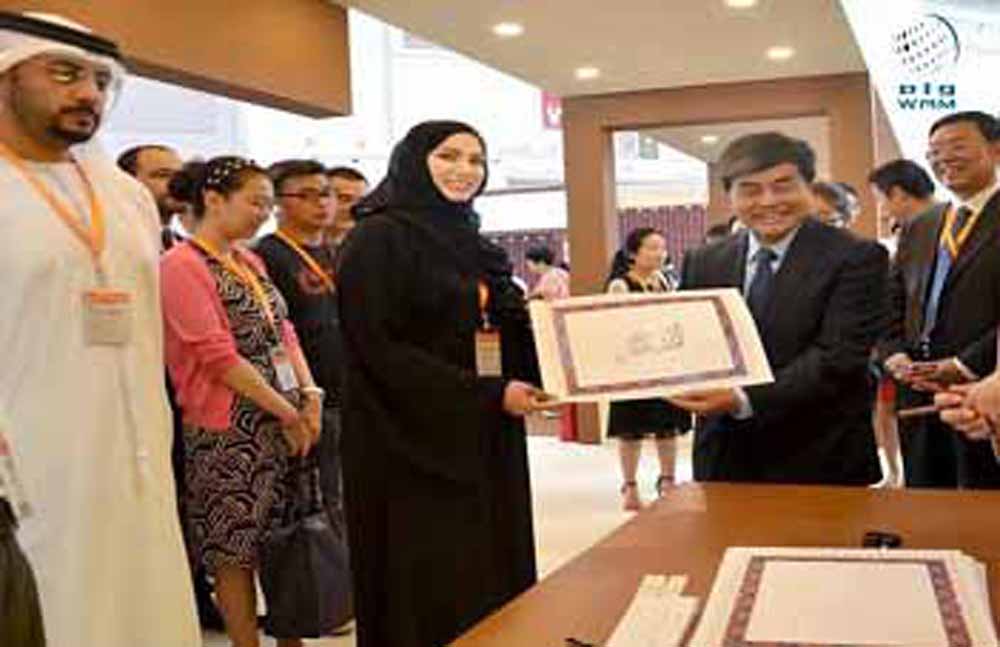 The Ministry of Culture, Youth and Community Development yesterday launched the UAE Cultural Week as part of the country's participation in the Beijing International Book Fair 2015 (BIBF) as the 'Guest of Honour'.

The ministry said the Cultural Week seeks to introduce the UAE's Arab-rich culture, heritage, development, and progress model to the world, and interact culturally and socially with participating countries.

Through its wise and creative leadership and its culture-loving people, the UAE carries its own creative vision that promotes the principles of prosperity and development in its pioneering cultural renaissance, as well as its never-ending quest towards achieving a unique place among other countries in the different fields of sustainable development, mainly creative industries, culture and arts.

'Choosing the UAE as a guest of honour at the Beijing International Book Fair 2015 represents an exceptional achievement in the cultural relationship between the UAE and the People's Republic of China. The two countries have deep-rooted civilisational achievements that are thousands of years old represented by the Chinese civilisation in Southeast Asia and the Arab-Islamic one in central and western Asia represented by the UAE,' Afra Al Sabri, Under-Secretary of the Ministry of Culture, Youth and Community Development, said during the ceremony, which was attended by Yang Zhijin, Chinese Vice Minister of Culture, Hakam Al Hashemi, Assistant Under-Secretary for Culture and Arts, Ministry of Culture, Youth and Community Development, Saeed Za'al, Charge d'affaires, UAE Embassy in Beijing, and a group of active figures in the field of culture, arts, publishing and authorship in the country, including many visual artists and calligraphers from the Emirates Fine Arts Society, as well as several male and female practitioners of traditional crafts and a number of Emirati publishers.

'Being the guest of honour, the UAE delegation will have the opportunity to bring to light the culture, art and heritage of the Emirati people and familiarise the Chinese audiences with the characteristics of the Emirati cultural identity, so as to build bridges of knowledge exchange and openness to the other through the values of tolerance, knowledge and human brotherhood,' she added.

Al Sabri said the UAE greatly valued and appreciated the journey that the Beijing International Book Fair had achieved over its long history which reflects the substantial richness and diversity of the different Asian cultural groups in general and the Chinese one in particular.

'We are also very grateful for being chosen the guest of honour at this very important cultural event,' she added.

The 22nd Beijing International Book Fair, one of the world's largest, will run from 26th to 30th August, at the New China International Exhibition Centre in Beijing. The 2015 fair attracted 2,270 publishers from 82 countries, an increase of 5 percent compared with last year, according to the organiser. The number of overseas participants to join the fair has risen 6.3 percent year-on-year. A total of 270,000 titles will be displayed in five halls, covering an area of 66,000 square metres.

A traditional highlight of the BIBF is that the guest country of honour always attracts quite a bit of attention every year.

This year, the UAE will stage a series of activities to introduce Chinese readers to Arab history, culture, film and art, including its famous Arabic calligraphy and Henna tattoos. The UAE stand features Emirates' corner design which reflects the country's continuous quest to develop and enhance its aesthetic taste and cultural and heritage identity. The corner was creatively designed in line with the spread of modern arts in the UAE. The structure itself with its corners, walls, ceilings and the overall external parts, represent prominent elements inspired by the Emirati heritage that are presented in a modern way combining both the cultural identity and the Emirati architecture with modern architecture.

A heritage photo gallery contains a visual record that has been captured by Emirati photographers reflecting their love for the country and its cultural and heritage legacy. The gallery also tells the story of civilisation, the building of a state, the journey of creating a union and the empowerment of the people. It includes photos that document the features and details of the Emirati everyday life both in the past and the present within its heritage and cultural dimensions.