UFC: You are a champion, Sheikh Hamdan hails Khabib 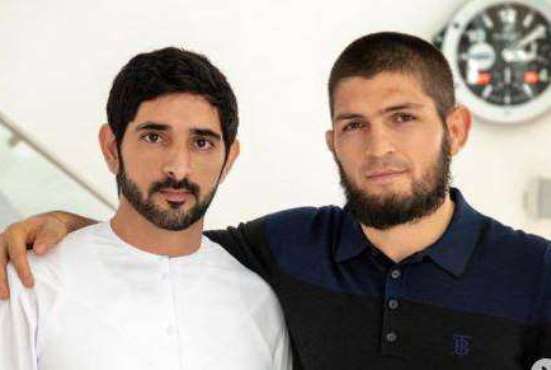 Tributes continue to pour in for Khabib Nurmagomedov, the unbeaten 29-0 UFC champion, who announced his retirement after defeating Justin Gaethje at UFC 254 in Abu Dhabi's Fight Island on Sunday.

Sheikh Hamdan bin Mohammed bin Rashid Al Maktoum, Crown Prince of Dubai and Chairman of the Executive Council, shared pictures of him meeting Khabib on his official Instagram account."A champion, both in and out the octagon," Sheikh Hamdan wrote, sharing pictures captioned with an emoji of an eagle – a nickname for Khabib.

The pictures were taken at Dubai's Nad Al Sheba (NAS) Sports Complex, where Khabib had trained for what was eventually his last bout. After his triangle choke submission victory over Justin, Khabib said he cannot return to the octagon for another fight without his father and mentor Abdulmanap, who passed away in July. While it was widely believed that the 32-year-old Khabib would retire only after achieving a 30-0 landmark, the Russian fighter revealed that it was his mother that didn't want him to fight without his father.

Thus Khabib ended his career with a 29-0 record on Sunday.Before Khabib went into what was the last fight of his glittering career, Cristiano Ronaldo and Conor McGregor were among the high-profile sportsmen who wished Khabib."Congrats bro, your father is proud!" Juventus' Portuguese superstar wrote on Instagram. McGregor, Khabib's long-time UFC rival, also paid a glowing tribute to the Russian."Good performance Team Khabib. I will carry on. Respect and condolences on your father again also.