Where to celebrate the 48th UAE National Day 2019? 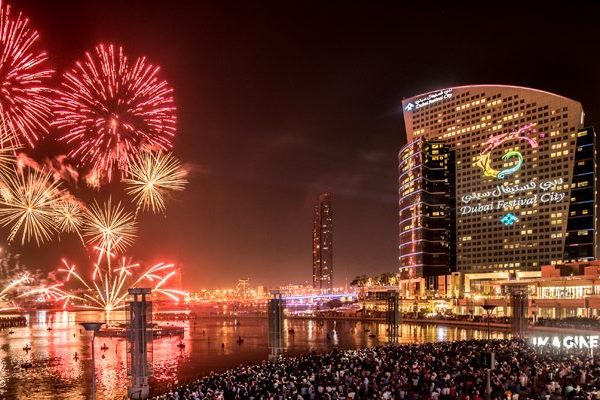 This year, you’re spoilt for choice when it comes to fireworks shows across the city. Take your pick from Al Seef, La Mer, The Beach, Dubai Festival City, Global Village or The Pointe for a show over Dubai’s horizon.

The 48th UAE National Day celebrations at the end of the Formula 1 Etihad Airways Abu Dhabi Grand Prix are set to include a host of fun activities for the family, including fireworks and a classic car parade featuring the Al Qubaisi sisters, who will be taking part in the F4 race at this year’s five-day festival.

This year, the on and off-track entertainment is spread across three areas of Yas Marina Circuit – Abu Dhabi Hill, Main Oasis and Marina Oasis. Entry is free, from 3pm, with fireworks scheduled for 9pm.

At Yas Marina Circuit’s Kart Zone, kids aged 5-7 can kart for a special Dh48 price, and the top leaderboard scorer in each category will win karting passes for the next month. Groups of four will receive free membership cards, while groups of eight will be given a double session for the price of one, in addition to free membership cards.

As well as a UAE National Day car parade and drift display, there will be an opportunity for those in attendance to Walk The Track to experience how it feels to get up close and personal with the F1 circuit.

Elsewhere, artworks submitted by schools and local communities will be exhibited at the event. The cultural hub of the National Day celebrations — the Heritage Village — will be located on Abu Dhabi Hill.

Fireworks will then light up the sky at 9pm on the day.

‘Legacy of Our Ancestors’ in Abu Dhabi

Preparations for the Legacy of our ancestors show. A 50-minute theatrical masterpiece showcasing Emirati heritage and values will regale a packed audience in the capital during the Legacy of our Ancestors show on December 2. The show, produced by the Organising Committee of the Official 48th UAE National Day celebration in collaboration with Flash Entertainment, will be held at the Zayed Sports City, and has been developed by 5,000 people from 70 different countries.

A 50-minute theatrical masterpiece showcasing Emirati heritage and values will regale a packed audience in the capital during the Legacy of our Ancestors show on December 2. The show will be held at the Zayed Sports City and has been developed by 5,000 people from 70 different countries.

The narrative itself was developed by local artistes, in collaboration with international experts, and revolves around stories of courage and pride, and about people who are resourceful, resilient, honourable and devoted.

Gates open at 4pm on the day. Parking will be available at the Abu Dhabi National Exhibition Centre and at the Sheikh Zayed Grand Mosque.Shuttles will transport ticket holders to the venue.

Tickets are priced at Dh60 per person. People with special needs, the elderly and children aged 2 years or less can attend free.

The free-to-attend UAE National Day concerts will kick off with a performance by the Emirati singer Eida Al Menhali at beachfront destination La Mer on November 29, followed by Balqees and Kuwaiti singer Essa Al Marzouq dazzling fans on December 1 at the same venue.

All three concerts at La Mer will start at 8.35pm. The music concert at Global Village is scheduled to commence at 9pm.

Music in the Park

Malhaar Centre for Performing Arts is back the next edition of ‘Music in the Park’ and this time the theme is UAE National Day. The concert will be staged on November 29 at 4pm at the JLT Park, Dubai.The highlight of the event will be a choir performance by the students of GEMS Modern Academy, Dubai, where students will be performing Mahatma Gandhi’s favourite composition ‘Raghupati Raghav’ in Arabic and Hindi. The event is free for all.

The popular Emirati singer will headline a UAE National Day concert at the Bawabat Al Sharq Mall in Abu Dhabi on December 3. Alain will be joined by other musicians including Mohammad Al Matroushi and Hazza Al Dhanhani as well as poets Mohammad Al Saqri and Mohammad Elbriki. The show will be hosted by Abdulla Al Muhairi.

The concert will be the culmination of a six-day UAE National Day celebration at the mall, which kicks off on November 28. Activities will include face painting, henna and coffee and date areas as well as Emirati dance performances and appearances by UAE character mascots.

Apart from the festivities, shoppers stand to win a Ford F150 Raptor when they shop for Dh200 at any of the stores in the mall or Dh400 at Carrefour.

It’s a double-bill with the Grammy Award-winning singer who will make his UAE return at White Dubai’s hip hop night URBNon on November 30.

Considered one of this generation’s greatest entertainers, Usher is ranked as one of the world’s best-selling artists having sold more than 50 million albums worldwide. He will run through his many hits include ‘Burn’, ‘Love in this Club’, ‘Caught Up’, ‘DJ Got Us Fallin’ in Love’ and ‘OMG’.

Catch him again at Mad Yas Island the following night as part of the F1 Grand Prix gigs. Entry is Dh500 for men (including two drinks), Dh200 for women (including one drink). From 11pm until late.

This UAE National Day, head to Dubai Festival City to catch a special Imagine show which pays tribute to the many nationalities that call the UAE home. Part of the Dubai Festival City Mall’s Faces of the Nation campaign, shoppers are invited to share their photos on social media using the hashtag #FacesoftheNation for a chance to be part of the projections on December 2.

The night will also see fireworks displays and traditional Emirati entertainment to entertain visitors, creating a buzz along the waters of Festival Bay. Arrive early and grab a table at one of the many restaurants to get the best views of the exciting celebrations.

The cultural festival is returning for its eighth edition in December with a brand-new roll call of artists from around the world. Get ready for two days and three nights of Sole DXB, a celebration of everything from fashion and music to art and sport.

This year’s theme is Jamaica, with the sights and sounds celebrated with mento, bashment, ska, rocksteady, dub, reggae, ragga beats and Dancehall as the focus.

Sole DXB takes place at Dubai Design District, the event runs from December 5 to 7, with tickets starting at Dh295.

Shopping malls and public beaches around Dubai will be buzzing with live entertainment to commemorate the 48th UAE National Day. Celebrations will start on 29 November at locations across the city, including Kite Beach, Box Park, The Outlet Village and Bluewaters.

Enjoy Emirati bands, flag processions, dance performances and live acts while you learn about traditional arts and crafts such as clay pot painting and carpet weaving. Watch the skills of calligraffiti artists around Dubai from City Walk to the Last Exit and head to waterfront locations like Al Seef and La Mer to catch exciting firework displays.