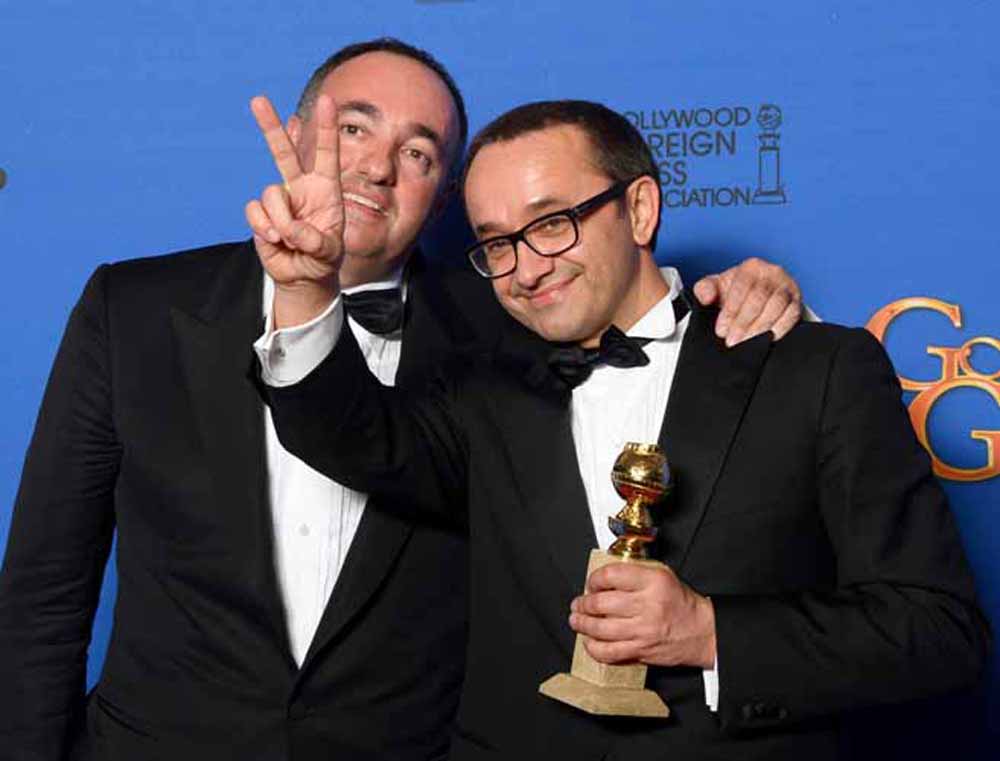 Of the two events which riveted our attention, one was the Sony hack by the rogue state of North Korea, which was a direct outcome of its extreme reaction to the satirical movie ‘The Interview’ depicting its infamous head, and the other was the more recent Paris attacks on the magazine Charlie Hebdo which sadly left 12 people dead and many others injured.

The result would be a mixed cocktail of feelings with some saying that freedom of artistic expression was not to be tampered with while others felt that a line had to be drawn as certain topics were sacrosanct. The crucial result was that these events stopped us in our tracks and set us all thinking (seriously at that).

And as if to lend allure to the debate, one lady in particular (and a human rights lawyer at that) swept us collectively off our feet at the Golden Globes – Amal Clooney. Now what are the chances of that happening in a thousand Golden Globe ceremonies? If you were to really consider, practically nil. So there’s really more to the adage that nothing happens by chance but that everything happens for a reason.

And Clooney’s Amal is a lady with her head firmly on her shoulders. Recently while on her way to court, when a reporter asked who she was wearing, the pretty woman pointed to her black lawyer robes and laughingly shot back, “I'm wearing Ede & Ravenscroft!” (That’s a company that supplies gowns, hoods and hats for academic and legal occasions BTW). Now that’s really someone who knows where to draw a fashionable line we can assure you.

Theo Kingma, president of Hollywood Foreign Press Association, received a standing ovation when he made a speech touching on both the events. He called out for freedom of speech, everywhere from North Korea to Paris.


"The freedom of artistic expression is a beacon across the globe. We stand united everywhere from North Korea to Paris," he said. On the red carpet of the awards, stars like George Clooney, Kathy Bates and Helen Mirren carried 'Je Suis Charlie' buttons, a slogan adopted by supporters of press freedom around the world.


After North Korea condemned 'The Interview' and hackers threatened attack on theatres showing the comedy. Sony pulled the movie, only to release it later in a limited theatrical release and digitally.

The ceremony's brilliant hosts, the famous duo, Tina Fey and Amy Poehler joked about the movie during their monologue, saying North Korea's condemnation wasn't even the worst review the movie got. (Just in case anyone had got it wrong).

Later, comedian Bill Cosby too was not spared. For the world woke up too late to the fact that the man may have made us all laugh at serious cost to the lives of numerous young women whose trust he betrayed. And if NBC cancelled his programmes, it was about time it did.

None of us want to have anything to do with his kind, ever.

The show also left us wondering just what women directors need to do to get their due (and if you also happen to be a black woman, may the good Lord help you). Ava DuVernay, who directed the highly acclaimed, Martin Luther King Jr. biopic Selma, became the first black female to be nominated for a best director Golden Globe.

We read however, that the Motion Picture Academy failed to nominate her and the black lead actor for the Oscars. You may well ask why. It seems the jury traditionally judges what is termed as ‘body of work’ by a director and Ava has just three films to her credit. It’s a clear signal that it’s time we revised outdated rules that serve little or no purpose.

Glory plays over the closing credits of Selma and was written at the request of director Ava DuVernay. The film was also nominated for best picture, best director and best actor.

There were upsets galore as to who won what as far as awards went.

Perhaps the chief Oscar rival to Boyhood, Alejandro Gonzalez Inarritu’s Birdman, also fared well. It won best actor in a comedy or musical for its lead, Michael Keaton, who plays a former superhero star tinged with his own history, and best screenplay.

Reflecting on his life, Keaton’s voice broke up as he thanked his son, whom he called his best friend. “Shoot,” he said. “Two things I swore I wasn’t going to do: cry and give air quotes.” We recall at this moment, Danny Boyle’s reaction when his ‘Slumdog Millionaire’ won an Oscar. He jumped up and down on stage like Calvin (of ‘Calvin & Hobbs’ fame) to keep up a promise made to son if his film was to win an award.

But in a shocker, Birdman was upset by Wes Anderson’s Grand Budapest Hotel for best film, comedy or musical.

George Clooney at 53 was honoured with the Cecil De Mille Lifetime Achievement award for his contribution to cinema. Announcing the award, the witty hosts joked that while his wife was a much-applauded human rights lawyer fighting for serious issues on an international scale it was her husband Clooney who would be receiving an award that evening! (Talk about wit as being a masterful blend of humour and intelligence).

And handsome Clooney did not forget to pay tribute to his wife’s presence in his life in a rather touching way, ‘It’s a humbling thing when you find somebody to love.” Great going George!

In one of the evening’s most hotly contested categories, best actor in a drama, Eddie Redmayne emerged as victorious over Benedict Cumberbatch (The Imitation Game), Steve Carell (Foxcatcher), David Oyelowo (Selma) and Jake Gyllenhaal (Nightcrawler) for his performance as Stephen Hawking in The Theory of Everything. Even the great Hawking himself confessed that Redmayne had played him to a ‘T’ and at times felt it was himself on the screen.

Julianne Moore won best actress in a drama for her startling performance as an academic with early on-set Alzheimer’s in Still Alice.

Amy Adams surprised in taking best actress in a comedy or musical for her performance in Big Eyes. “I didn’t even reapply lip gloss,” said Adams, surprising one and all with her honesty.

The first award of the night went to J.K. Simmons for best supporting actor for his performance as a domineering jazz teacher in the acclaimed indie Whiplash. He thanked his confident co-star, Miles Teller, whom he called: “A young actor of such maturity and brilliance that he inspired me every day to want to scream at him and hit him in the face.”

The DreamWorks sequel How to Train Your Dragon 2 took best animated film over the favourite, The Lego Movie.

And it was with bated breath that we waited to hear the Russian entry Leviathan had scooped up the best foreign language film. The black comedy by talented director Andrey Zvyagintsev has been on a major winning spree ever since its release and was adjudged the best film of the 45th International Film Festival of India, selected to compete for the Palme d'Or in the main competition section at the 2014 Cannes Film Festival it won the award for Best Screenplay for Zvyagintsev and Negin.

As the only major awards show to honour both movies and TV, the Globes have also benefited from television’s rise. Hosts Tina Fey and Amy Poehler alluded to that by leading the crowd in a call-and-response cheer, chanting “Movies ... Awesome! TV ... Better!”

Led by Fey and Poehler, the Globes have been on a terrific upswing in recent years. Last year’s awards drew 20.9 million viewers, the most since 2004.

To its credit, the Hollywood Foreign Press, a group of mostly freelance journalists, has lately cleaned up its reputation for idiosyncratic choices and awards swayed by celebrity. Last year, it chose the eventual Academy Awards best-picture winner, 12 Years a Slave, as best drama and American Hustle as best comedy.

There were so many glam ladies in silver that we wondered if they were paying tribute to the silver screen. So we start with stars who dazzled us in this metallic hue…

Pretty Dakota Johnson of ’50 Shades of Grey’ fame was lovely in a sleeveless Chanel gown.

Jennifer Lopez chose a Zuhair Murrad caped gown which exposed a little too much in the front particularly. And abandoning her famous hoop earrings she went for a pair of Lorraine Schwartz waterfall earrings.

However, Amy Adams was a vision in a one-shoulder periwinkle blue Versace gown teamed with Tiffany & Co jewels.

But Jennifer Anniston just didn’t nail it in a black halter neck Saint Laurent by Hedi Slimane gown. But those Neil Lane earrings did help lift the look.

Also in black but with a pair of long white gloves pulled on was Mrs. Clooney who looked stylishly chic in a Dior Couture dress (and the best accessory on her arm, husband George Clooney), and a striking pair of Harry Winston diamond earrings. Also adorning a pair of Harry Winston earrings was the lissome Cindy Crawford in a draped blue jersey dress.

Also clad in an Atelier Versace gown (but an extremely daring one at that) was the charming Kate Hudson who chose Forevermark earrings for that extra special sparkle.

Daring to eschew a gown for a jumpsuit was popular actress Emma Stone in Lanvin who glowed more than ever.

Miu Miu was Sienna Miller’s choice when it came to her gown while she matched it with American style icon Tiffany & Co’s jewels.

Taking up the silver trail was Reese Witherspoon in a sleeveless Calvin Klein Collection and Tiffany & Co jewels whose performance in real life drama ‘Wild’ is being praised as her best ever.

Older actresses, like the legendary Helen Mirren looked swelte and ‘red-dy’ for action (considering her role in the movie ‘Red) in a red Dolce & Gabbana number matched by Chopard’s Red Carpet collection earrings.

Offering her competition was the gorgeous-in-orange 77 year old Jane Fonda in a body-hugging Versace number and Bulgari’s Diva earrings.

Gwenyth Paltrow decided to go pinkkkkk in a Michael Kors gown with a bold plunge for a neckline.

Yelling out her presence in a yellow Gucci gown was Bulgari’s brand ambassador Naomi Watts who flaunted a Serpenti necklace.

Salma Hayek looked girlish in a white Alexander McQueen gown and Boucheron jewels. (But why the floral headpiece we wonder?)

Julianne Moore was a winner in a silvery Givenchy Haute Couture by Riccardo Tisci gown matched by sparkling Chopard jewels.

So until the Oscars come around, here’s a brief adieu from us to you as we ponder about some issues of serious significance that the event brought up…