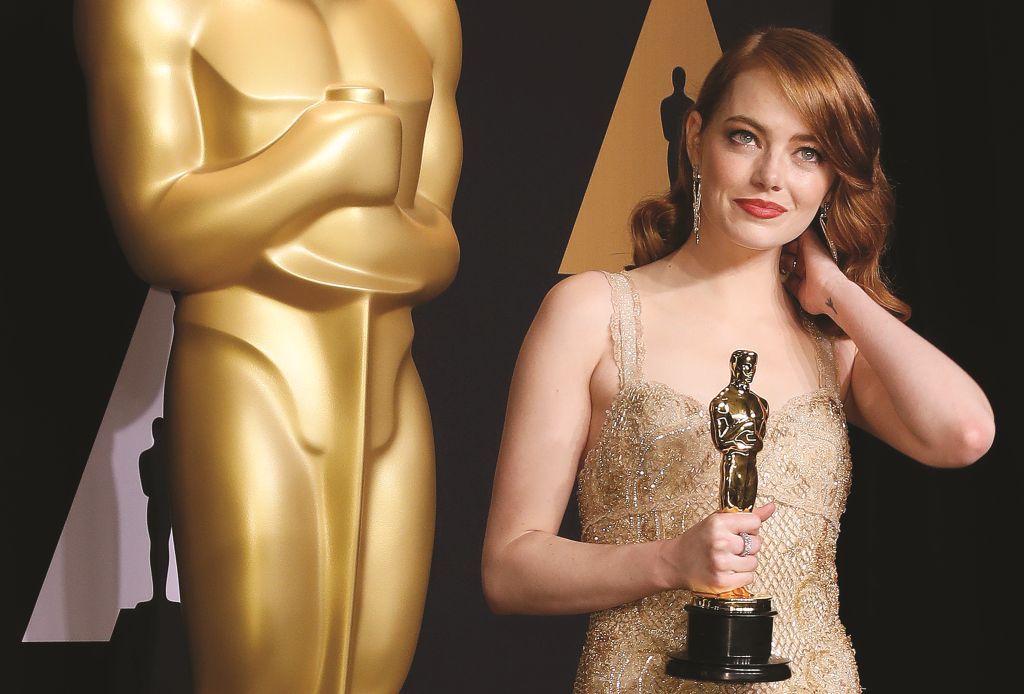 The much-awaited 89th Academy Awards ceremony, presented by the Academy of Motion Picture Arts and Science (AMPAS) to honour the best films of 2016 took place on Feb. 26 at the Dolby Theatre in Hollywood, Los Angeles California presenting awards in 24 categories. It was hosted by the comedian Jimmy Kimmel for the first time. And while we were all coasting along comfortably expecting Trump protests, ravishing red carpet looks, pranks between Kimmel and Matt Damon and even La La Land scooping up awards for all its 14 nominations, surprise winner Moonlight scooped up Best Picture after a certain incident towards the end of the show shook up things in a way we least expected. And that’s why the Oscars are still not over…unofficially

The 89th Academy Awards will go down in history as one of the most controversy-ridden editions which will be remembered from the last moments of the show onwards when one of the greatest blunders of the show’s history took place. There were controversies galore even before the ceremony took place, with stars eager to voice their protests in subtle and not so subtle ways. But it will also be recalled for the great films lined up for our viewing pleasure telling us tales of deepest anguish and of hard won victories. And it all took place in La La Land after all, so what can we expect except showbiz?

It was a night of historic records: Damien Chazelle became the youngest best director winner in the history of the Oscar awards and Moonlight became the first film from a black writer-director Barry Jenkins to win Best Picture opting for some genuine empathy instead of escapism which La La Land symbolizes. It was also the first LGBT-related film and the first film with an all black cast to win the Best Picture award. So do watch it.

Hacksaw Ridge starring Andrew Garfield and Manchester by the Sea produced by Matt Damon and starring Casey Affleck won two awards each and winners with one included Arrival, Fantastic Beasts and Where to Find Them, Fences, The Jungle Book, O.J: Made in America, Piper, The Salesman; Sing, Suicide Squad, The White Helmetz and Zootopia.

You have to account for it all in the end. Little did the rest of the world know the role a famous accountancy firm played in the biggest shows of them all, the Oscar awards. Of course, we did know accountants lurked somewhere in the background, submerged in dusty files and Excel sheets, counting and tallying up endless figures. But what we did not know was that two of them actually stood backstage (one to the right and the other to the left) and handed the celebrity presenters the envelopes bearing the winners names. Fancy that! To be frank, it was a revelation truly.

A certain member of the accounting fraternity brought it all to light by sheer accident by sending a loving Twitter to his wife resulting in the wrong envelope being handed to Beatty. So now, after a partnership of 83 years, our blissful ignorance has received a shake up and we view the unusual tie-up between the Academy of Motion Pictures and PriceWaterhouse and Cooper (hitherto known as PwC) suspiciously.

(Not-so) poor-veterans Warren Beatty and Faye Dunaway’s moment marking the 50th anniversary of their classic Clyde and Bonnie took a toss when they came onstage to announce the very last award for the night: the Best Picture award, to the wrong film that is. And Beatty was left trying to explain the unexplainable.

To its credit, the show started off well with singer Justin Timberlake surprising the audience by dancing down the aisle singing “Can’t stop the feeling”, the expected jokes from Jimmy Kimmel, La La Land expected to scoop awards for most of its absurdly 14 nominations and of course the Trump protests’ which (sigh) don’t see sign of abating in the near future.

It even went to the extent of the pre-Oscar party being cancelled and in its place a protest against Prez Trump’s travel ban led by none other than Jodie Foster herself. At one point, we saw an ‘anxious’ Kimmel even Twitter Trump asking him ‘Hey Trump what’s up?’

We expected the 11-year faux feud between Kimmel and Matt Damon to come up in a prank and it did with Kimmel himself orchestrating the music to drown out Damon’s co-presentation with best friend Ben Affleck of the Best Original Screenplay award to Kenneth Lonergan for Manchester by the Sea.

But it was after the said wrong envelope was read out by Faye Dunaway it turned into a bumpy ride which saw Kimmel promising he won’t come back for the next edition. We will make sure to remind him in case he does pop back.

But if reports by a leading tabloid are to be believed there could be more to it all as CCTV cameras saw him (that is the accountant) also shuffling the envelopes backstage. The extent some biased folks will go to steal (or at least dim) someone else’s moment of glory is unbelievable.

And so it was that the almost all-white La La Land team trooped up triumphantly to receive their expected Best Picture award only to graciously hand them over to the cast of the almost all-black Moonlight when the mistake was corrected a critical one and half minutes later.

But not before, let’s take note.

Lagerfeld apparently did not take it lightly and went so far as to state that she chose Saab’s creation as she was paid to wear it. Stoop not to conquer! Never one for taking things lightly, Streep demanded an apology from Karl and got it too. It was a clear fashion faux paux by Karl. How can you ever forget the saying, ‘Fury thy name is woman!’

The red carpet did not disappoint us as far as variety went but it did when it came to colour with several key leading stars going for gold such as Emma Stone in a graceful gold Givemchy Couture dress fringed in tiers.

“A moment like this is a huge confluence of luck and opportunity”, said an effusive Emma Stone while collecting her award from Leonardo de Caprio who had brought his mom along for the event. We couldn’t agree more with her, as her acting in The Help certainly demanded more histrionics than did La La Land.

Rank the musical alongside Barbra Streisand’s Hello Dolly, Julie Andrew’s Sound of Music or Mary Poppins and it fails.

The pretty Felicity Jones who opted for a blushing pink dress for the golden globes was a washout in a paler than pale dress by Dior from the Spring 2017 Couture collection. Even Omega ambassador Nicole Kidman nominated for Best Supporting actress for the heart wrenching ‘Lion’ chose a gold-cum-nude sleeveless dress by Armani Prive and was in danger of merging in the background if it was not for a red lip and hubby Keith Urban dapper in a classic tux. Her co-star Sunny Pawar aged 8 won smiles for his colourful sneakers.

But one full-sleeved golden Gucci number made our jaws drop to the floor literally more for the star wearing it than for its cut or silhouette, as it was worn by Dakota Johnson of 50 Shades Darker fame who looked like a nun. To make it worse it had a fan-like apron too. she amped up with a Cartier necklace and two rings.

Jessica Biel notched it up in a silver and gold KaufmanFranco full sleeved dress and a striking Tiffany necklace with singer hubby Justin Timberlake on her arm saying, “I call it perfection baby!”

In contrast, the ladies in punchy reds stood out with added presence such as powerhouse talent and Best Supporting actress winner Viola Davis, the demure Ruth Negga in Valentino who was nominee for true story biopic (and must-watch) Loving and Jinnifer Goodwin in a lacy, pretty Zuhair Murad dress.

One exceptional gown which won accolades was the lovely Leslie Mann in a mustardy Cinderalla-esque creation by Zac Posen. Seen enjoying her moment to the fullest in the media spotlight was darling Halle Berry in an utterly feminine Versace one shoulder gown, and Forevermark Diamonds who celebrated ‘big hair’.

Beautiful in black was last year’s Room star Brie Larson in a sleeveless Oscar de La Renta and nominee for must-watch movie Hidden Figures Taraji P.Henson in á sleeveless Alberta Ferretti and Latino star Salma Hayek in a lacy Alexander McQueen matched by Sophia Webster shoes. Ín black too (but not so eye-grabbing) was Louis Vuitton’s ambassador, Alicia Vikander who if she loses some more weight will certainly disappear.

Also in a black and gold Louis Vuitton number was Michelle Williams Striking a cross between gold and black was Dior ambassador Charlize Theron adorned to excess in Chopard’s Kalahari collection.

This edition was marked by so many controversies, even we in the media found it tough to keep up with all of them.

Even the Best Actor award was tainted with controversy when it went to Ben Affleck’s little bro Casey Affleck for Manchester by the Sea. The junior Affleck was embroiled in some unsavory case of sexual misdemeanor in the past and several folks demanded to know how he could even be nominated after that. The past does catch up with us apparently. He was nominated alongside Denzel Washington for Fences, Andrew Garfield for Hacksaw Ridge and handsome Ryan Gosling in Gucci for La La Land and Viggo Mortensen for Captain Fantastic.

The Best Supporting Actor went to actor and rapper Mahershala Ali for Moonlight. He is the first Muslim actor to win an Academy Award. He looked smart in an exclusive black peak lapel tuxedo by Ermenegildo Zegna Couture.

Bringing his two very cute dates, two stuffed pandas, one boy one girl Chan La and Chan Zy, wearing UNICEF pins was well known Chinese martial arts icon, actor, director, producer and singer Jackie Chan. he is goodwill ambassador for the charity and is recipient of an honorary Oscar at the Governor’s Awards in November 2016 for his work in over 200 movies throughout his 56-year career.

Ryan Gosling came with a very attractive lady and set the media’s tongues wagging considering Eva Mendez is his loving better half. Until it was discovered that it was his sis Mandy.

To finish up, the winner of the Best Foreign Language Film, The Salesman’s Iranian director Asghar Farhadi had refused to fly down for the ceremony in protest against Trump’s travel ban of countries. He had also won Iran’s first Oscar for his film A Separation in 2012. Supporting him across the Atlantic in London’s Trafalgar Square was the London Mayor himself who had organized a free screening of the film at the famous venue with thousands of milling protestors in the UK. Sigh…

Even four days after the show had wound up it appeared we had not heard the last of it, as the Academy extended an apology to Australian movie producer Jan Chapman for displaying her picture instead of the late Janet Patterson’s picture in the memoriam list of those who had passed away last year. Chapman announced she was “devastated” by the error. We too dear…

So until the next edition rolls in (sans all the dramatics), let’s settle down and catch up with that list of great blockbusters which was what the show was created for in the first place 89 years ago to celebrate…