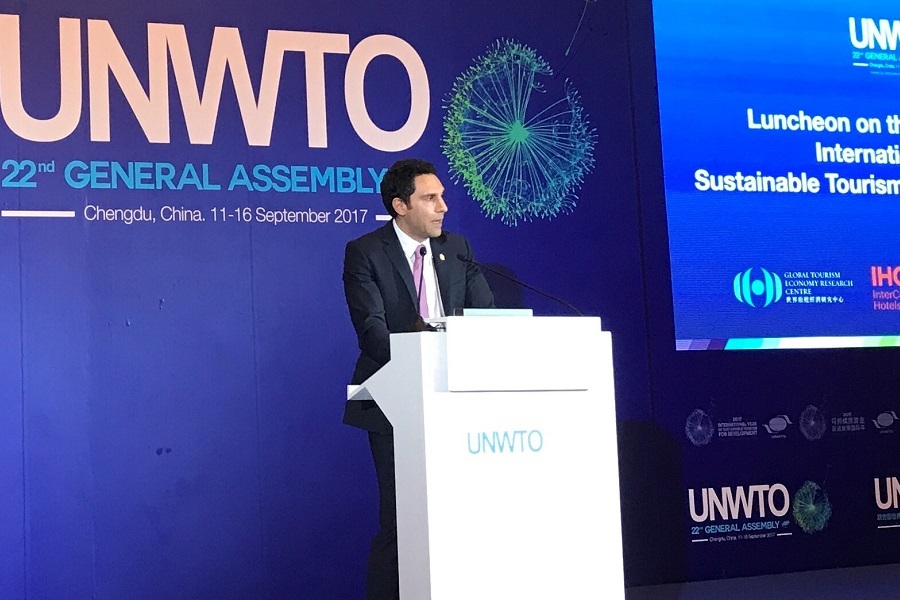 Celebrating nine months as a sponsor of the International Year of Sustainable Tourism for Development 2017, Mattar shared with industry peers that further growth is expected throughout the remainder of this year as Ras Al Khaimah readies to opens the world’s longest zip line in December.

The UNWTO Luncheon was opened by the Secretary-General of the United Nations World Tourism Organization (UNWTO) Taleb Rifai and attended by a number of tourism ministers and global travel industry leader.

More than 1300 delegates from over 130 countries attended the opening of the 22nd session of the World Tourism Organization (UNWTO) General Assembly in Chengdu, China this morning. During the next four days, the priorities of the Organization for 2018-2019, the transformation of the UNWTO Code of Ethics for Tourism into an International Convention and the impact of technology on tourism will centre the discussions. On the agenda of the Assembly is also the election of the Secretary General for the next four years.

“China is an inspiration to others in terms of its supportive tourism policies and in placing tourism at the centre of its poverty alleviation and national development strategies,” said UNWTO Secretary-General Taleb Rifai at the opening of the 22nd session of the General Assembly. “Besides being the fourth most-visited country in the world, with 59 million international arrivals in 2016, China is also the largest domestic tourism market, with 4.4 billion trips made within its borders,” he added.

Wang Yang, Vice-Premier of the People’s Republic of China, recalled that, since the inclusion of China in UNWTO in 1983, the tourism sector has grown to represent 10% of the country’s economy. Vice-Premier confirmed that “smart tourism” will guide the development of the sector and highlighted the need to enforce policies to enhance sustainable tourism.

At 14 September 2017, Zurab Pololikashvili, current Ambassador of Georgia to Spain, Morocco, Algeria and Andorra, has been appointed Secretary General of the World Tourism Organization (UNWTO) for the period 2018-2021.