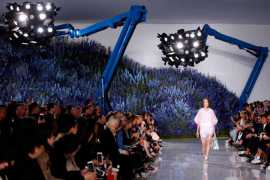 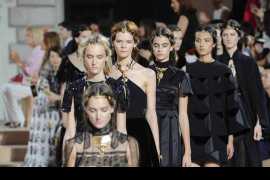 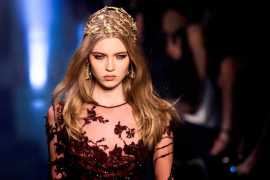 The Fall Haute Couture collection celebrates the maison’s heritage and chronicles, through an imaginary journey, the creative path of designer Elie Saab, from his debut in High Fashion up to now. Gold is the thread running through the whole collection. Drawing from mosaics and the ancient Byzantine palaces, the colour synonymous with luxury par excellence ornates fluid lace gowns, the jewellery embellishing the models’ hair and the boxy clutches with chain strap. The collection culminates... Read More 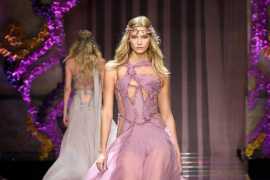 The new Atelier Versace collection was showcased on a runway embellished with multicolored orchids. Donatella also for this season revisits the house’s signature sexiness but makes it less fierce. The new Atelier collection is a celebration of light dresses in frayed chiffon, asymmetrical bustiers scattered with Swarovski crystals, maxi dresses in flouncy organza, mini tunics with metallic embroidery, evening dresses draped over the body and kept in place by fabric knots. Flirty crowns and... Read More 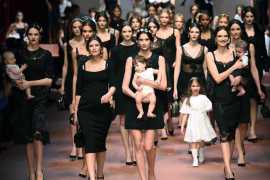 The inspiration of the Dolce&Gabbana Women’s Fall 2016 collection was THE MOTHER (mamma in Italian).

The mother is the heart of the family and in this way Mr. Dolce and Mr. Gabbana had a very intimate, personal approach when creating this collection, because the image of the mother that inspired them comes from their own memories as children. The collection has a great amount of creativity (new shapes, embroideries, prints, collage) and it featured 89 looks (plus the finale). The... Read More

Based in a custom-made white tent, reminiscent of the iconic New York Fashion Week tent of Bryant Park, over 700 stylish guests enjoyed attending a fashion show in the luxury custom that they have come to expect from Harvey Nichols – Dubai. The guests were... Read More

Imagine a chic club brimming with the affluent and the well-travelled. It’s a space that brings a section of people who connect through their mutual love for fashion, travel and music. Splash created that atmosphere for its guests this season to showcase the AW’15 collection that was an amalgamation of classic trends with an updated look.

The cafe was a glamorous one which saw the Bespoke Military and Retro Futuristic trends coming together to create the ultimate look for a jet... Read More

Ulyana Sergeenko is a star in her native Russia and her glamorous and romantic looks are constantly snapped by street-style photographers. Her Haute Couture collections attract a bevy of celebrities fascinated by the exquisite femininity of her creations that pay tribute to the history of Russia by referencing the stylistic language of the country accented by masterful craftsmanship in the shape of fine and elaborate embroideries that echo the Russian heritage. The current collection is a... Read More

The Chanel Autumn/Winter 2015-16 Haute Couture collection could be the perfect script for a Hollywood French-American colossal. Gathered around a private club’s game table recreated specifically for the fashion event at the Grand Palais are some of France’s most famous maison’s old and new friends, from Kristen Stewart to Alice Delall, Julianne Moore and Rita Ora as well as Isabelle Huppert , Geraldine Chaplin and Vanessa Paradis. While the actresses are concentrated playing at the roulette... Read More 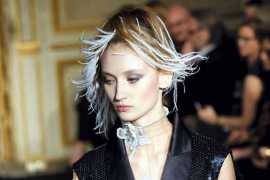 French designer Alexis Mabille is reputed for the cheekiness and girlishness of both, his Haute Couture and ready-to-wear. This season was no different, and yet the designer achieved to infuse a poetic and bucolic beauty into his floor-skimming, body-con shaped evening gowns. "There are strange evenings when flowers have souls", read the show-notes. And it was precisely the delicate soul of a burgeoning flower that Mabille wanted to capture, hence embroidering magnolia garland appliqués,... Read More